Arson in Moville: ‘People won’t tell you what they really think’ 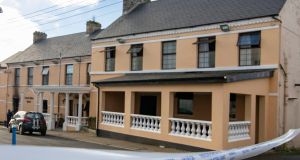 Caiseal Mara hotel in Moville, Co Donegal, which was s subjected to an arson attack last weekend ahead of the arrival over the coming weeks of 100 asylum seekers. Photograph: North West Newspix

When the people of Moville, Co Donegal, learnt about two weeks ago that the town’s biggest hotel was to close and reopen as a direct provision centre before Christmas, reaction was more polarised than that being expressed over the last few days.

Whether this is because the hotel was subjected to an arson attack last weekend and people feel they should now temper opposition to the plan, or because people have become more used to the idea of 100 asylum seekers joining the remote community of 1,400 people, it is hard to tell.

1 Former solicitors ran an ‘identity factory’ in committing fraud – court told
2 Ciara Kelly: I was pregnant, unmarried, a junior doctor and I got old-school comments
3 Kanturk farm shootings: A timeline
4 Cork shootings: Postmortems on two of three family members complete
5 Son (23) who died in suspected Cork murder-suicide was due to graduate
6 Coronavirus: Too early to say if Ireland has turned a corner, warns Tony Holohan
7 Large retailers modify stores and block off non-essential products from customers
8 Cork suspected murder-suicide may have been over disputed will
9 Third person arrested in education board corruption investigation
10 Robbie Henshaw likely to be the only Irish change for France finale
11 Michael McDowell: We must check if this Covid-19 lockdown is really necessary
12 Deaths of father and sons may have been over disputed inheritance
13 Cork shootings: Gardaí hope ballistics report can provide answers
14 Hospitals across Europe running out of beds due to ‘runaway’ Covid cases
15 Carefully-revived D7 terrace with work-from-home scope for €595k
16 Back to brack: An easy Halloween bake
17 How much state pension will I get next year?
18 Suspected murder-suicide shooting in Cork leaves father and two sons dead
19 From the past to modernity: images of Ireland transforming
20 Seán O’Brien: Anger over my parents’ break-up never left me
21 Former priest who downloaded child abuse imagery jailed
22 Woman who lost damages case over ‘thrill ride’ must pay appeal costs
23 Breathe easy to maximise your running experience
24 Two hundred Irish retailers for all your online Christmas shopping
25 Covid-19 transmitted in fewer than 10 schools – Nphet
26 ‘Shellshocked’: Outrage in Australia after women on flight strip-searched in Qatar
27 US sex cult founder Keith Raniere sentenced to 120 years in prison
28 Woman stranded in Ireland due to pandemic has ‘miracle baby’
29 Husband loses appeal to overturn interim barring order
30 A nation takes to its feet: Walking ourselves out of lockdown
31 Gardaí say 52 people who went missing in 2020 not yet found
32 Vicky Phelan feels ‘betrayed’ by CervicalCheck tribunal
33 Don McLean on the meaning of American Pie: ‘Who cares, who gives a f**k’
34 Covid restrictions make it difficult for Irish women seeking abortions to travel
35 Covid-19 in a cramped inner-city flat: ‘It felt like the walls were closing in’
36 Cian Healy: ‘Realistically I got away with murder when I was younger’
37 Essex lorry deaths: victims pleaded for lorry doors to be opened, court hears
38 Martin Feeley: Hospital admissions don’t justify pressing the panic button
39 The baby black market
40 Life under Level 5: Where can I go, who can I see, what is closed and what is open?
Real news has value SUBSCRIBE