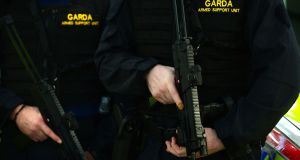 The Garda Armed Support Unit was called to an eviction dispute between a homeless family of four and an emergency accommodation provider in Dublin’s north inner city on Monday.

At 11am gardaí were called to 16 Upper Gardiner Street, the site of a private emergency accommodation provider.

Gerard Doyle (36), his partner and two children aged five and six had been residing in the homeless accommodation for the past nine months, Mr Doyle said.

The family was involved in a dispute with management, Mr Doyle told The Irish Times. The family refused to leave the apartment, and Mr Doyle said he barricaded the door, after which gardaí were called.

Two gardaí identified themselves as members of the Armed Support Unit when speaking to the family through a window, while standing on a fire escape, according to a video of the incident posted by Mr Doyle on his Facebook page.

Gardaí told the family they were not there to remove them from the property. “We were told there was somebody being held against their will, and that’s why we’re here,” one of the gardaí stated in the video. “We’re just here to make sure everybody is safe,” he said.

A Garda spokeswoman said the occupants were advised the eviction issue “was a civil matter and gardaí left the scene”.

A spokeswoman for the Dublin Region Homeless Executive (DRHE), which manages the emergency accommodation system, confirmed it had been in contact with the private operator regarding the incident.

“Some incidents have occurred at the premises and the management informed the DRHE this morning that they could no longer accommodate this family for reasons of good management and health and safety,” she said.

“The DRHE has contingency facilities in place to accommodate families in a crisis situation such as this when the need arises,” the spokeswoman said. The DRHE could not reveal the name of the private operator, she said.

Private operators running emergency accommodation in most cases have their own set of rules for occupants, and have discretion to refuse to house individuals. In such cases individuals would be advised to present to the DRHE, which would assist them in securing alternative emergency housing.

A group of activists from Take Back The City, the network behind recent high-profile housing occupations, gathered outside the property to support the family.

A member of staff inside the building said they could not comment on the matter when approached by The Irish Times.