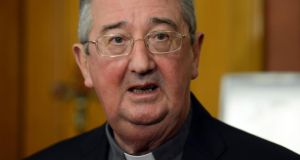 Archbishop Diarmuid Martin of Dublin has told religious congregations in the archdiocese that “when we talk about meaning and hope . . . there is a vast challenge which the wisdom of age and experience and a depth of faith can bring to young people” in schools.

Recalling that the number of religious in schools today was minimal, he asked: “How do you reactivate in your lives today that passion for caring for young people that your founders and foundresses had?”

Literacy
His comments follow a suggestion in the past fortnight by Minister for Education Ruairí Quinn that time allocated for the teaching of religion in schools might be better used to teach literacy and numeracy.

Mr Quinn was asked at the annual conference of the Irish Primary Principals’ Network where teachers would find the time to implement the initiatives he was planning. He said: “I would like it to be out of the 30 minutes a day for religious education.” Mr Quinn said he wanted to see progress on the divesting of religious institutions from primary schools, which was agreed with the church under the terms of the forum on patronage and pluralism in the primary sector in 2011.

Archbishop Martin at Mass in Terenure College, Dublin, on Monday night, said: “Today, the number of religious directly involved in teaching and management in schools is minimal.

“Good religious were never just managers and administrators of schools: the good religious teacher was someone who played a vital role in the life of a young person, a name that the young person remembered fondly for their entire life.

“The church urgently needs to find new ways not just of denouncing what is wrong, but of being – within all those in society – of being travelling companions with young people in their search for their true selves, for values which transcend and for the ability of how to say no.”

Archbishop Martin appeared to be referring to the death of Jonny Byrne from Leighlinbridge, Co Carlow, who was taken from the river Barrow on Sunday morning.

Neknomination
His death has been linked to a social media drinking craze known as neknomination. It involves people filming themselves drinking large quantities of alcohol, mainly spirits, posting the video online, and nominating someone else to do the same.

“When we talk about meaning and hope, about the fundamentals, about what life is about, the sense of goodness and truth, and where young people anchor the values of their lives, there is a vast challenge which the wisdom of age and experience and a depth of faith can bring to young people.

“Just think of the pressures that young people, especially vulnerable young people, face today: from their peers, from the complex culture of social media, from a culture of drink; and how even one mistake can possibly ruin a life. Examples abound as we have seen tragically in these days.”