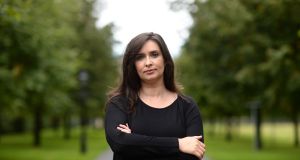 Dr Aoibhinn Ní Shúilleabháin revealed how she had been subject to regular harassment by a professor at the university. Photograph: Dara Mac Donaill/ The Irish Times

President of UCD, Professor Andrew Deeks, has confirmed he contacted lecturer and broadcaster Dr Aoibhinn Ní Shúilleabháin on Sunday evening, to personally apologise for the harassment and abuse she suffered at the university for two years.

In The Irish Times on Saturday, Dr Ní Shúilleabháin revealed how she had been subject to regular harassment by a professor at the university, Hans-Benjamin Braun, over a two-year period after she had first reported the issue to the authorities in Belfield.

In a statement on Sunday afternoon, UCD president Andrew Deeks apologised to Dr Ní Shúilleabháin and other colleagues and students who had suffered similar experiences at the university.

However, on Sunday evening Dr Ní Shúilleabháin tweeted: “I’m very surprised to be reading about an apology from UCD President Andrew Deeks, since I haven’t received one or any communication from him on this matter.”

When contacted after the tweet, a UCD spokeswoman said: “Professor Deeks did not want to contact Dr Ní Shuilleabháin in the midst of the media attention and had intended to speak with her personally after the weekend.

“His focus was on expressing his deep sorrow at what had happened to her and his resolve to introduce changes to tackle harassment in all its forms in the university setting. He has since been in touch with Dr Ní Shúilleabháin.”

Earlier, the National Women’s Council welcomed plans by Minister for Further and Higher Education, Simon Harris, to adopt a “zero tolerance approach” to sexual violence and harassment in third-level institutions.

NWC director, Orla O’Connor, said Mr Harris’ recent instruction to all universities and other colleges to draw up an action plan for tackling the problem on their campuses, which will be overseen by the Higher Education Authority, was “a very positive” development.

In the Irish Times article on Saturday, Dr Ní Shúilleabháin related how Braun had regularly shown up in her office at UCD, asked her out on dates, made persistent phone calls and in one incident followed her to a hotel in Cork where she was staying.

Braun (58), who worked in UCD until 2019, was issued with a court order in late 2019 barring him from contacting her for five years after she had reported the matter to gardaí.

In his statement,Prof Deeks said: “Bullying, harassment, sexual harassment or sexual misconduct have no place in UCD and we are already working to strengthen our current policies with a number of measures.”

The university would adopt “a core procedural shift” in future by giving it the option to investigate allegations of sexual harassment without a formal complaint being made, he said.

Other measures include a new concept of disclosure on sexual harassment and misconduct as well as clarifying the relationship between informal and formal internal complaints and complaints to gardaí.

The UCD president said he had no doubt that it had been a very difficult personal decision for Dr Ní Shúilleabháin to come forward with her story.