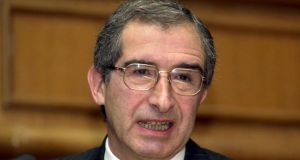 Prof Sir Rodley, who is UN Human Rights Commitee chairman, said that a “very unpleasant game” was currently being played out in Britain where the future of the European project and human rights protection was being “confused” in the public mind.

Prof Sir Rodley, who spoke on international action against torture at the Irish Centre for Human Rights in NUI Galway on Thursday , said the current array of human rights legislation had been hard won and was “very fragile”.

It was “troubling” now to hear political leaders, in Britain and elsewhere, stating that they did not want the UN Convention on Human Rights to preclude deportation of non-nationals to home countries where they may face torture, he said.

Some of the “rhetoric” may be “kite-flying” by politicians who “may want to be seen to be coming up with new ideas” at a time when there was understandable fear about terrorism, he said.

“ But one doesn’t want to throw out what is worth preserving for the sake of dealing with the spectre of what may happen,”he said.

“It is 41 years since Amnesty International launched its first campaign, when I was engaged as its first lawyer, and it is 30 years since the passing of the UN Convention against Torture,”he said.

“Though it is very hard to measure, and I am no longer directly involved as as UN special rapporteur on questions of torture, I don’t think there is as much incidence of political torture worldwide,”he said.

“The whole of Latin America has moved to constitutional forms of government, for instance,”he said.

“In the early days, the information we used to get in Amnesty was on political cases,”he said.

“By the 1990s, there was much less political torture, but quite a lot of torture by police of ordinary criminal suspects as the police didn’t have the training to do it any other way,”he said.

“In other words, to get the bad guys, they had to be bad guys, and governments would turn the other way,”he said.

“I do think that the range of attention, and the international and national machinery which has developed to address the issue has had some effect,”he said.

“For instance, the UN Convention Against Torture had more limited effect in 1984 than it does now,”he said, due to development since then of an optional protocol which obliged member states to provide their own national machinery.

“There is a lot of international machinery which represents pressure on states to clean up their act,”he said.

Human rights legislation had been “an historic achievement” that “doesn’t necessarily have the full support when the going gets tough,”he added.

Prof Sir Rodley is also due to speak at NUIG on Friday at the unveiling of the archive donated by the family of late international lawyer, scholar and activist Prof Kevin Boyle.

Prof Boyle was an “outstanding international lawyer” who was committed to freedom of expression and resistance of discrimination, and he had left a extraordinary legacy in founding human rights centres at both NUIG and the University of Essex, he said.