‘An avalanche of homelessness is coming,’ says McVerry 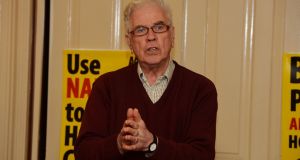 Fr Peter McVerry is predicting that ‘an avalanche of homelessness is coming down the road’. File photograph: Alan Betson/The Irish Times

Campaigner Fr Peter McVerry is predicting that “an avalanche of homelessness is coming down the road” and that the Pope’s visit is “a test run.”

The problem is “getting worse and worse” he told RTÉ’s Today with Miriam show.

“It is beyond a crisis, it is getting out of control and the Government doesn’t know what to do. I really fear what is going to happen in the next two years.”

Fr McVerry said he had been shocked but not surprised at reports that a mother and her six children slept on plastic chairs in Tallaght Garda Station on Wednesday night.

“The difference between this case and others is that photos were taken of the children sleeping on plastic chairs and the photos went viral. That’s what caused the outrage.

“This has been going on for months.”

He said that the majority of people now presenting as homeless have come from the private rental sector where they were evicted because the landlord was selling the property or carrying out renovations.

The flow of people from the private rental sector into homelessness was like trying to empty out the bathwater while the tap was still running, claimed Fr McVerry.

“The reality is the Government has no solution. They don’t know what to do about it and the situation is getting worse.”

Five years ago there were no homeless families now it was a phenomenon that had come about as a result of the failure of Government policy, he said.

“If a family becomes homeless the Dublin Regional Housing Executive tells them to get a hotel themselves and then they’ll pay for it.

“How can you do that and mind six kids and move all your belongings? Self accommodating is an absolute disgrace.”

While he had mixed feelings about family hubs, he said they were “better than nothing.”

The Pope’s visit will be a test case for pressures on the system, he warned.

Fr McVerry also pointed out that there are 43,000 mortgages in distress in the country, what will happen when they are repossessed?

“That could create an avalanche of homelessness and we won’t be able to cope with it.”

Brexit will also mean further challenges with staff from financial services companies moving to Dublin. “Those staff will take up accommodation from the private sector.”

He also warned that children are being emotionally, psychologically and educationally damaged by homelessness and he feared that in the future he would see them a drop in centres seeking assistance.