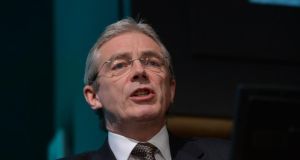 Gordon Jeyes, chief executive of Tusla, confirmed last night the agency had offered Ms Y the opportunity to engage on the issue of the baby’s future. Photograph: Alan Betson

The baby of Ms “Y”, the woman at the centre of the latest abortion controversy, is to remain in State care for a further two months at least.

Her solicitor has told the authorities she has no wish to participate in decisions about the baby’s future, The Irish Times has learned.

The baby boy was born at just under 26 weeks’ gestation by Caesarean section last month. Ms Y, a young immigrant, had sought a termination of her pregnancy.

She had arrived in the State earlier this year and found out she was pregnant shortly afterwards. She says she had been raped before she arrived here. She accessed crisis pregnancy support soon after, at about eight weeks’ gestation. She became increasingly distressed as it became clear she was unable to travel for an abortion due to the costs involved and restrictions on her right to travel. She says she was suicidal.

She came to the attention of HSE psychiatric services at about 24 weeks’ gestation, when it was deemed too late to abort the pregnancy, despite the fact she was deemed suicidal under the provisions of the Protection of Life During Pregnancy Act.

The pregnancy was instead delivered by Caesarean at about 26 weeks after she had gone on a hunger and thirst strike.

Tusla, the Child and Family Agency, has in recent weeks sought to engage with Ms Y as to the future care of the baby. She does not wish to participate.

At a care order application hearing in the District Court, held in camera on Wednesday, Caoimhe Haughey, solicitor for Ms Y, confirmed her client did not wish to participate in decisions about the baby’s future care. A two-month care order was granted to the Child and Family Agency.

Gordon Jeyes, chief executive of Tusla, confirmed last night the agency had offered Ms Y the opportunity to engage on the issue of the baby’s future.

He said this was a normal part of the process where a child’s care needs are to be decided and where the child is in the care of the State.

This process was ongoing, he said, “while fully observing the decision and wishes of the young woman”.

It was important that stability be brought into the baby’s life as soon as possible, he said.

Separately, Ms Y has a new legal team and is no longer represented by a State-appointed solicitor. Ms Haughey, an expert in medical negligence, has been given instructions by Ms Y to represent her.

She will also be represented by Eugene Gleeson SC, who represented Praveen Halappanavar at the inquest into the death of his wife, Savita Halappaavar.

A HSE report on the care Ms Y received is due to be published later this month.