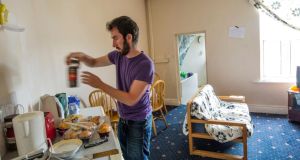 Seamus Farrell of the Irish Housing Network in the Bolt Hostel on Bolton Street, Dublin: “When you see so many buildings like this boarded up, and thousands of people who need a roof over their heads, direct action like this is common sense”. Photograph: Dara Mac Donaill.

Housing activists in Dublin have “reclaimed” a former hostel that has been vacant for three years, saying they will soon open it up to house homeless families.

Formerly known as Bolton House, the building on Bolton Street is owned by Dublin City Council and was used to accommodate homeless people before being closed in 2011.

The property had been deemed “not fit for purpose”, a council spokeswoman said. “Upgrading works need to take place and plans for this are being considered by the local authority.”

In recent weeks however, organisations that have emerged in response to the housing crisis came together as the Irish Housing Network and identified the building as one they could quickly put back to use as emergency accommodation.

“We researched it and found it was owned by the council,” said Séamus Farrell, a teacher involved in the network.

“So we entered the building a few weeks ago. It was in very good condition, considering it’s been empty for three years. We knew with a bit of work it could be really nice.”

Plumbers and electricians have been in, on a voluntary basis, to ensure wiring is safe, to fix a leaking pipe and make sure taps and toilets are working.

There are six bedrooms over three floors, three bathrooms, a kitchen and a number of living areas. There is more communal space in an adjacent building, which was also part of the original Bolton House.

The stairs are carpeted and the rooms are clean, albeit in need of redecoration. Rooms are sparsely furnished but new curtains and bed linen have been donated.

The “liberation” of the building – renamed the Bolt Hostel – has been publicised on social media and the group had stalls on the street last weekend to tell the local community what they were doing.

“There has been an outpouring of support from people,” said Mr Farrell.

Homeless people and families have been in touch asking about moving in.

“We got a letter dropped in yesterday from a couple who have been living in a tent for 18 months.”

Among the nine groups involved are the North Dublin Bay Housing Crisis Committee, the Housing Action Network, Lending Hand and An Spréach, which means “Spark” in Irish.

“When you see so many buildings like this boarded up, and thousands of people who need a roof over their heads, direct action like this is common sense,” Mr Farrell added.

Dublin City Council is to meet An Spréach and the Network to discuss the future of the building.