‘I feel like Bono,’ says the disability rights activist 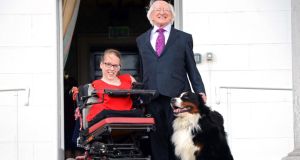 
Joanne O’Riordan was beaming as she emerged from Áras an Uachtaráin yesterday afternoon with President Michael D Higgins and his wife Sabina.

The Cork teenager, who celebrates her 18th birthday today, was overjoyed when her brother told her she’d be visiting the Áras. “This is a really cool way to mark the start of my 18th birthday,” said Joanne. “I mean come on, getting to hang out with the president in the Áras is crazy. I feel like Bono!”


Photographs
Surrounded by members of her family, Joanne posed for photographs marking her visit to the home of the Irish President.

She was also joined by the enthusiastic Shadow and Bród, Mr Higgins’s Bernese mountain dogs, who were reluctant to leave their owner’s side.

Mr Higgins had contacted Joanne’s brother Steven for a copy of his newly released documentary, No Limbs No Limits . The film documents the life story of Joanne, who lives with a rare physical disability known as total amelia. Joanne was born without limbs and is one of just seven people in the world living with the disability.

Steven, who directed the film, said he was pleasantly surprised when he received a call from the President’s private secretary inviting his sister and the family to visit.

“At first I thought it was a complete wind up but when the invite came I was delighted.”


Transformed
Joanne’s mother Ann O’Riordan said it was “hard to imagine” Joanne had overcome so many barriers in 17 years, while her father Joe said their daughter had “transformed” their lives.

“Joanne has opened up a world that is fun, adventurous and spontaneous,” said Joe O’Riordan. “It is fitting that the day before she turns 18 she gets to meet the President.”