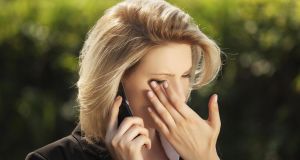 According to Connect’s figures, the most common setting for abuse to have happened to callers in 2014 was in the family at 45.5 per cent, followed by the community at 27.5 per cent. Institutional abuse accounted for 16 per cent of calls

An Irish counselling service for abuse victims has reported a 22 per cent increase in the number of people making contact.

The service said that over half of the callers (54 per cent) described an experience of sexual abuse in 2014.

Connect, which was established in 2006 and is part funded by the Health Service Executive (HSE), is an out-of-hours phone service open for calls between 6-10pm from Wednesdays to Sundays.

The number of calls made by victims seeking help is expected to reach over 10,000 by the end of the year.

Connect manager Theresa Merrigan expressed concern that almost a third of calls are made when the lines are closed.

She said of the calls received when lines are open counsellors were able to answer 85 per cent of them – 5 per cent more than last year.

Ms Merrigan said the 2014 figures reflected a continuing year-on-year growth in demand and an increasing pressure to meet that demand within the time constraints of the 20 hours a week which Connect is funded for.

“In 2014 there has been a high number of new callers which has placed a pressure on staff to find other services for callers as there is a concern around Connect’s ability to provide intensive ongoing support to such a high number of individual callers,” she said.

“Most callers are in need of intensive support and, while Connect can support people through crisis, our goal is to provide initial support and then direct people towards face-to-face services where they can receive the support of multi-disciplinary teams.”

Connect also reported that 3 per cent of its calls originated from Northern Ireland or elsewhere in the UK.

Ms Merrigan said: “We would still like this figure to be higher as many abuse survivors now live in the UK.”

She said that an increasing number of callers talked about multiple experiences of abuse and neglect. “Many report emotional and physical abuse in familial contexts where they were abused by multiple family members,” she said.

“Such experiences in childhood lead to emotional difficulties in adult life which vary from depression to self-harm and suicidal thoughts.”

According to Connect’s figures, the most common setting for abuse to have happened to callers in 2014 was in the family at 45.5 per cent, followed by the community at 27.5 per cent.

To meet additional demand at this time, Connect extended its opening hours to seven nights a week for six weeks.

Of the callers who made contact, 61 per cent were female and 39 per cent were male, which represented a 4 per cent increase in men availing of support since last year.