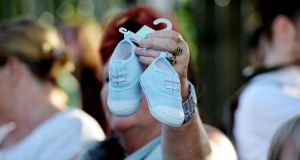 An infant’s shoes are held up at a march of 300 people from the Department of Children and Youth Affairs on Mespil Road to Government Buildings to protest about the death of babies at the Tuam mother-and-baby home. Photograph: Alan Betson

Almost 80 per cent of the 796 children who died in the Bon Secours mother and baby home in Tuam did not live to see their first birthday.

Figures provided by the General Register Office, via the Department of Social Protection, show measles, whooping cough and influenza were some of the most common causes of death among the children who passed away in the Co Galway home between 1925 and 1961.

The records show that Kathleen Cloran, who passed away on March 27th, 1932, had the longest life of any of the 796. She lived for nine and a half years before succumbing to what the records cite as “ulceration of larynx”.

On the other end of the spectrum, two children were listed as having passed away just 10 minutes into their lives.

A boy with the surname Walsh, whose first name was “unknown”, died on July 25th, 1939. His cause of death is listed as “asphyxia neonatorum” - a failure to begin regular respiration after birth.

A second child passed away 10 minutes into their life on March 10th, 1946. The cause of death is noted as “premature”. The child, surname Haugh, is not given a first name and the sex of the baby is not noted.

The highest number of deaths recorded in a single day was four - on April 30th, 1926. That came during a week when 13 children died as part of an apparent measles outbreak.

The outbreak resulted in the deaths of 25 children - 16 girls and nine boys - between April 5th and May 16th, 1926. The ages of these children ranged from two months to eight years.

Subsequent measles outbreaks saw 22 children die of the infection between November 27th and Christmas Eve of 1936. A further 17 children died of measles between May 20th and July 16th of 1947.

Whooping cough was a factor in more than 50 deaths in the home. Some 11 children died as a result of the illness, also referred to as Pertussis in the records, between February 20th and March 31st, 1948.

Forms of tuberculosis led to at least 45 deaths, the last of which was in 1950. Meningitis was cited as the cause of more than 30 deaths.

Marasmus , a severe form of malnutrition, led to the deaths of 10 children aged between two and 12 months. The last of these was Michael John Gilmore on September 21st, 1946.

A number of the deaths came as a consequence of illnesses that are largely treatable today such epilepsy, tonsillitis, diabetes and coeliac disease.

Several records highlight how language use has changed with a number of children noted as being an “idiot”, while there are also references to “imbecile” and “mongol”.

Walsh (21 instances), Murphy (14), Kelly (14), Burke (13) and Flaherty (11) are the most regularly recurring surnames in the records. There are 76 girls named Mary listed as having died in the home. Mary features in a further 70 names of those who passed away - such as Mary Ann, Mary Theresa and Mary Kate.

The earliest recorded death in the home is that of Patrick Derrane, who passed away aged five month as a result of “gastroenteritis” on April 26th,1925. The last record relates to the death of Mary Carty, who died on January 15th, 1960. The files state that the four and a half month old died as a result of a “fit”, while noting she was “a restless baby”.