6,000 social housing units to be provided this year

Figure is 1,000 more than estimated at the beginning of the year 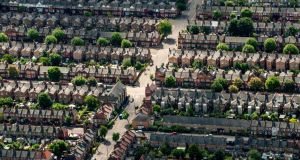 The increase from 5,000 to 6,000 new homes is largely due to additional funding of €20 million this year to bring vacant local authority houses and flats back into use. Photograph: Dominic Lipinski/PA Wire

Up to 6,000 new homes are expected to be available by the end of this year to some of the 90,000 people on social housing waiting lists, according to a briefing document prepared for Minister for the Environment Alan Kelly.

The rate of social housing supply, which includes houses leased from private landlords, is about 1,000 units ahead of what was forecast at the beginning of this year, the ministerial briefing document states.

A breakdown of the figures shows the largest number of houses – 2,500 – will be provided through the Rental Accommodation Scheme, whereby local authorities draw up contracts with landlords to provide housing for people who have been on the waiting list for more than 18 months and pay rent directly to the landlord on behalf of the tenant.

Some 1,200 units have come from other leasing arrangements. These include 400 properties sourced from Nama, and 350 houses and apartments which have become part of the the Mortgage to Rent scheme, which allows homeowners who have fallen behind on their mortgage payments to remain in their homes as tenants.

The Capital Assistance Scheme, which provides funds to voluntary housing bodies to construct homes for people with particular needs, such as the elderly or disabled, is expected to deliver 275 homes. The regeneration of local authority flats and houses is expected to provide another 230 units.

However, the increase from 5,000 to 6,000 is largely due to additional funding of €20 million this year to bring vacant local authority houses and flats back into use. A total of 1,800 units, some of which have been empty for several years are due to be refurbished and rented out to tenants by the end of the year.

In addition to the homes which will be available by the end of the year, construction is expected to begin on 1,000 social housing units. Of these, 400 will be built by local authorities and 250 by voluntary housing bodies; 350 are to be part of council regeneration programmes which will begin this year.

Of the 500 applicants whose homes have been damaged by “pyritic heave”, where the presence of the mineral in the foundations has caused subsidence and cracks in the structure, just 50 have so far been approved for inclusion in the scheme, at a cost of €3.2 million.

The documents say the assessment of the remaining applications will be completed shortly. Separately the briefing documents put the final cost of the Mahon planning tribunal at €159 million, almost €100 million less than had been forecast by Judge Alan Mahon last year.