The Ig Nobel Prizes are home to some unique studies, from the power of a pash to how long it takes various species to pee 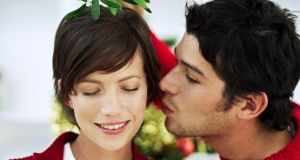 Sometimes a piece of research will make you go “huh?” And there are few better places to find out about them than improbable.com, which each year bestows Ig Nobel Prizes on the cream of the curious crop for “achievements that first make people laugh and then make them think”.

If you are smooching under the mistletoe this festive season, then the 2015 Ig for medicine could give you pause for thought. The prize was awarded to numerous scientists in Japan, Europe and the US for “biomedical benefits or biomedical consequences of intense kissing (and other intimate, interpersonal activities)”. Some of the research found that prolonged kissing – not just a peck – reduces some allergic responses among kissers.

In one 2006 experiment, 24 people with mild atopic eczema and 24 people with mild allergic rhinitis “kissed with lovers or spouses freely for 30 minutes while listening to soft music”. The researcher was able to measure changes in the kissers’ immune systems, and an alleviation of symptoms was recorded.

Someone who may not have had time for cosy kisses was Moulay Ismael the Bloodthirsty, the Sharifian emperor of Morocco from 1672 to 1727, who is reported to have sired hundreds of children.

Researchers in Vienna scooped the Mathematics Ig Nobel for casting a scientific eye on the evidence, finding that –mathematically at least – he could plausibly have sired more than 1,000 offspring in 32 years. “In general, results indicate that the emperor could have reached his notorious reproductive success with fewer copulations than assumed so far – thus the historic reports could be facts and not fancy,” they wrote last year in Plos One.

Meanwhile, the winner of the Ig Nobel in physics worked out that “mammals above 3kg in weight empty their bladders over nearly constant duration of 21 ± 13 [seconds] litres, is nearly 3,600 times larger in volume than a cat’s bladder, at 5ml.”

Why do we need to know how long it takes various species to pee? “Many urological studies rely on models of animals, such as rats and pigs, but their relation to the human urinary system is poorly understood,” write the researchers in their 2014 paper in the Proceedings of the National Academy of Sciences. “This study may help to diagnose urinary problems in animals as well as inspire the design of scalable hydrodynamic systems based on those in nature.” Huh?

Given the strange nature of the Ig Nobel-winning studies, it’s just as well we have words to express our puzzlement. The winners of the Ig Nobel Prize for literature took a serious look at those words across 31 languages.

“Huh? is not trivial,” states the huh.ideophone.org website about the research, which was published in 2013 in Plos One. “It might seem frivolous or even trivial to carry out scientific research on a word like ‘huh’, but in fact this little word, along with others that function in similar ways (for example, ‘Sorry?’ ‘What?’) is an [indispensable] tool in human communication.”