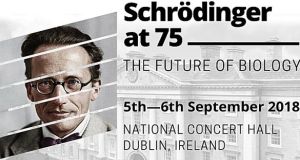 Some of the world’s leading scientists who have gathered in Dublin to consider issues of immense importance such as “what is life?” and “the future of biology” are doing so as “we are yet again in dark days”, according to Prof Luke O’Neill of Trinity College Dublin.

Speaking at the opening of the conference at Dublin’s National Concert Hall to celebrate the “audacious spirit” of scientist Erwin Schrödinger, Prof O’Neill said the theoretical physicist had illuminated the world during the second World War with his What is Life? lectures, which had led to a golden age in biology.

He added: “We have gathered together some of the brightest minds working on some of the biggest questions to stir the scientific melting pot. It is our great hope that this meeting and the seeds it sows will ensure Dublin will once again be remembered for shaping future work on that most important of all questions: what is life?”

The lectures, delivered in Trinity, are not the first time Ireland has played a pivotal role in enlightenment as Irish monks during the dark ages had “saved knowledge” and reintroduced it to mainland Europe. His dream as one of the organisers of the Schrödinger at 75 – the future of biology meeting was that it would generate “new ideas, new beginnings for science”.

When a conference was held in Dublin to mark the 50th anniversary of the lectures, he noted all the speakers were men, “which did not strike us as unusual at the time”. He was glad to note 40 per cent of speakers at the “Schrödinger at 75” event were women and included many emerging leading female scientists.

TCD chancellor and former president Mary Robinson said Schrödinger inspired generations of scientists, notably those who discovered the structure of DNA in 1953, the late Francis Crick and Jim Watson who was attending the meeting.

“Science discoveries drive economic progress and human development. That is what makes this meeting on the future of biology such an outstanding event,” she added.

Mrs Robinson said her current focus was the issue of climate justice, which needed to stay true to the science. “Sadly, there are still those who would try to deny or distort the science of climate change; thereby putting vulnerable countries and communities at even greater risk from climate change shocks.”

She commended scientists for having “the wellbeing of humankind” at the forefront of their research agendas, but she believed there was a need for them to “communicate better with the broader public and young people”.