Scientific advisers strive to be ‘honest brokers’ in times of crisis 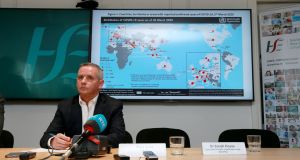 Chief executive of the HSE, Paul Reid, at a public briefing on winter flu and coronaviruis, also known as Covid-19. Photograph: Laura Hutton

How can scientists best inform public policymakers at a time when policy decisions are often complex and the science is uncertain? With the spread of coronavirus now challenging both scientists and policymakers across Europe, this was the timely theme of a recent workshop in the Royal Irish Academy, Dublin.

The experts speaking at the event included particle physicist and chair of the European Commission’s Group of Chief Scientific Advisors, Prof Rolf-Deiter Heuer; vice-president of Academia Europaea, Prof Ole Petersen; and chief scientific adviser for Wales, Prof Peter Halligan, who spoke about how scientific advice is shared with policymakers in the European Commission and Britain.

There was widespread agreement that scientists have to be “honest brokers” when sharing scientific knowledge with policymakers and the public. This means as well as being trustworthy, independent, transparent, inclusive and rigorous, scientists must be ethically, socially and intellectually responsible for the advice they give.

“Policy can only be evidence-informed rather than evidence-based,” Baghramian argued. “Policymakers often have unrealistic expectations of scientific advice but science is only one form of knowledge that must be integrated with local knowledge and indigenous knowledge to formulate policy solutions.”

Citing examples of scientific knowledge about climate change, biodiversity, pollution, nutrition or artificial intelligence, she said the science is complex and contains a high degree of uncertainty. The coronavirus outbreak had yet to spread widely in Europe when the seminar took place, but the disease, also known as Covid-19, is another clear example of this.

“What degree of uncertainty can policymakers tolerate?” she asked. There are many examples in the public domain which reveal policymakers’ intolerance for uncertainty. Arguably, this intolerance has influenced every time an international or national body delayed releasing information on new viruses, errors in screening programmes or uncertainty about the best diagnostic tools.

Speaking about how policymakers use scientific advice in Ireland, Dr Charles Larkin, research director at the University of Bath, said from his experience as an adviser to a member of the Oireachtas on healthcare, politicians often don’t have enough time with scientists to fully understand the advice they are given. They are often past the point of finding the best possible solution and are instead seeking out the second-best solution to solve the problem.

“There are also very sophisticated people using scientific methods to lobby into the Government system just before the budget. Some of these groups are honest and others aren’t. It’s difficult for the scientific community to compete with this,” Larkin said.

According to him, a risk-adverse civil service and light-touch Oireachtas committees make the situation more complex. “To be heard, scientists need to have the ability to translate excellent science to strong stories. We need to equip the Oireachtas library properly and give sufficient support to parliamentary committees to bring deep evidence.”

Irish Oireachtas committees are poorly resourced compared to the House of Commons and House of Lords in Britain, he believed.

Larkin used the example of how prompt scientific advice issued to the public could have avoided some of the recent controversy in Ireland surrounding cervical cancer screening – in that instance, medics failed to inform over 200 women about an audit of screening results. The audit found certain women tested positive for cervical cancer but were previously told their results were negative.

“The courts decided that there must be 100 per cent certainty for medical recommendations from screening programmes and that is scientifically impossible. If we had a top-class science advisory structure so that a reliable, honest broker was able to communicate with the public about how screening programmes are never 100 per cent accurate, the story would have been less convoluted and less painful.”

Jasmina Behan, head of the Irish Government Economic and Evaluation Service in the Department of Public Expenditure and Reform was another panellist in a discussion on science advice in Ireland. She said that since 2012, the Government has developed a team of experts to “champion the use of evidence to inform policy by building on national datasets for policy analysis”.

Prof Luke Drury of the Dublin Institute of Advanced Studies said that communicating science is difficult in this era. “We are trained to present evidence in a formal, systematic way, by being objective and using the passive voice. Yet we are told to tell stories, but anecdotes are dangerous for scientists because they aren’t data.”

Prof Drury said that there is a pool of expertise in Ireland that should be used for the benefit of society. “There is a terrible weakness in Ireland that these scientists – who would work pro-bono with expenses only paid – aren’t used. Having one chief scientific adviser for public policy isn’t good enough. We need a structure within the academic community that can feed knowledge, expertise and insight into policymaking in Ireland,” he added.

Prof Halligan said the need for science to be embedded in the policy process is increasingly understood. “However, science advisers must act as a knowledge broker rather than an advocate and expect to inform policy but not make it,” he added.

The Irish Government abolished the post of the chief scientific officer (CSO) when the former CSO, Prof Patrick Cunningham, retired in 2012. The government at the time then gave Prof Mark Ferguson, who is director-general of Science Foundation Ireland, the extra role as chief scientific adviser from that point forward.

Some scientists argue that having this dual role makes it very difficult for Prof Ferguson to have meaningful engagement with policymakers. Dr Brian Trench, independent researcher on science communication said in his view, “compared to the European Commission’s chief scientific advisers, we have a chief scientific adviser who is opaque with no transparence or independence.”

How do chief scientific advisers operate in the European Commission?

To date, the chief scientific advisers have advised the European Commissioners on everything from the health risks of microplastics to novel carbon capture technologies to food from the oceans, new techniques in agricultural biotechnology, cybersecurity in the European digital single market and glyphosate.

Understandably in recent weeks, coronavirus has topped the agenda more than anything else. They do not advise on science policy.

However, on Tuesday, March 17th, the European Commission launched an advisory panel on Covid-19 (https://ec.europa.eu/transparency/regexpert/index). This advisory panel is composed of epidemiologists and virologists from different member states. These experts will formulate EU guidelines on science-based and coordinated risk management measures to complement the work of the European Centre of Disease Prevention and Control. It will be chaired by the Commission President, Ursula von der Leyen, and co-chaired by Stella Kyriakides, Commissioner for Health and Food Safety.