In Northern Ireland, incentives are driving development in renewable replacements for fossil fuel, but the South is playing catch-up, and could well pay a big price in the form of EU fines 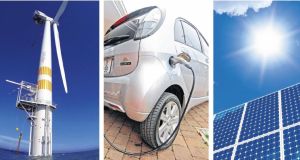 Ireland is on its way to meeting its renewable electricity target. However, chances of reaching the goal for transport and heat are not looking so good. Photographs: David O’Brien, Thinkstock

Many bioenergy researchers around Ireland have had to become policy experts as they attempt to navigate the complex world of regulation and legislation in order to bring their ideas from experiments to commercial models.

“The technological development is deeply interlinked with the policy, regulatory and commercial frameworks,” says Bart Bonsall, the technology leader at the Technology Centre for Biorefining and Bioenergy. “It is virtually inseparable.”

The centre was set up to develop new technologies for this sector. Bonsall says they had to adapt, and now they work on research and “all of the enabling frameworks that facilitate the deployment of the technology and the development of the market”. This includes implementing this in industries such as dairy, water, farming and breweries.

He says bioenergy is being produced in Ireland, but it isn’t being pumped into the grid. “That’s what we’re working with the industry on now.”

Ireland has committed to a number of targets, which must be met by 2020 under the EU’s renewable energy directive. The huge investment in wind power means Ireland is on its way to meeting the 40 per cent renewable electricity target, according to most experts.

However, they are not so optimistic about reaching the Irish goal for transport (10 per cent) or heat (12 per cent). If the targets aren’t met, significant penalties will be imposed by the EU.

Renewable heat and transport targets are proving hard to achieve, according to Bonsall. “We didn’t have all the regulatory structures in place to facilitate and promote the development of these industries.”

Des O’Toole, biomass business development manager at Ireland’s forestry body, Coillte, says “there’s absolutely no chance whatsoever that we’re going to reach our heat target, with six years left”. He adds that the renewable-heat sector has been largely ignored to date and believes that companies need a renewable-heat incentive similar to that given in the UK.

Others are worried that Ireland will be left behind as other countries implement bioenergy technologies. Barry Caslin, bioenergy specialist at Ireland’s agriculture and food development authority, Teagasc, thinks “in the last couple of years there’s a negative attitude being developed towards the whole bioenergy area”. He says Teagasc’s and many universities’ bioenergy research resources have been cut.

“Farmers aren’t engaging to grow these crops,” Caslin says. Many who planted the bioenergy crop miscanthus are now ploughing it out of their fields. Others “are committing crops to digesters in Northern Ireland to help meet energy targets in a different jurisdiction”.

Policy differences in Northern Ireland are the key distinction, says Simon Murray, project manager at the Questor Centre in Queen’s University Belfast. In the North, if people are “willing to make an investment in the digester, they can get a reasonable return so investors are willing to lend them money”, says Murray. This is not as an attractive a proposition in the South due to different incentives.

The Questor Centre is an industry-university collaborative research centre. “About four or five years ago, we were aware that anaerobic digestion was becoming an attractive technology but there was no support for this.”

Now they collaborate with a number of working digestion facilities across the six counties. Murray is working on “different feedstocks that will help the next generation of anaerobic digesters to be more efficient and effective so the burden on subsidies is not as great”. He works with a team of researchers who are trying to close the gap between bioenergy and traditional fossil fuels.

Bord Gáis Networks is also looking for ways to replace fossil fuel. It is about to open a new round of funding and is looking for “people to come up with and propose innovative things”, according to Kilgallon. He says it hopes to investigate research challenges such as energy production from algae and smart-grid integration of renewable gas.

Bonsall thinks it’s fortunate that Ireland has very good research capability and has been participating in EU-wide research and development programmes.

“The researchers at the scientific level are well versed not only in the energy technologies but also the value added technologies.” Though we’re currently far behind what other countries have done, “we can catch up very quickly provided the right policies and commercial frameworks are put in place because we have the base industry”.

Last June, the EU’s Energy Council agreed on a threshold of “7 per cent of the final consumption of energy in transport in 2020” for these older biofuels.

A number of Irish researchers are already working on newer generation biofuels. Dr Jerry Murphy’s research in UCC has evolved with the changing European legislation. His team worked on rapeseed a number of years ago but now concentrate on algae. Dr Murphy has experimented with a number of Irish seaweeds in anaerobic digesters.

For the seaweed, sea lettuce, the research team found the best mix was 75 per cent slurry and 25 per cent seaweed. Each year, a foot deep of this macro-algae floats onto the beach in Timoleague, west Cork. “Seaweed has to be taken off the beach,” says Murphy, who thinks “there’s no reason why Timoleague couldn’t have an anaerobic digester”. If the sea lettuce is diluted with slurry, he has calculated that the resulting biogas could power the entire Cork bus fleet of 80 vehicles.

“While bioenergy is very important, the reality is that, just like crude oil, the real value is in refining it,” says Dr Kevin O’Connor, senior lecturer at the School of Biomolecular and Biomedical Science in UCD. “Just burning biomass or making fuels is neither economically nor environmental viable.”

O’Connor is taking the byproducts of biofuel production and feeding them to bacteria. The bugs are put in a fermenter where they are tricked into making plastic which, like our fat cells, is a source of stored energy for them. This is then harvested and made into biodegradable plastic.