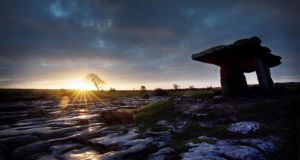 The Poulnabrone dolmen in the Burren, Co Clare, a kilometre from Caherconnell where the remains were found. Photograph: Dara Mac Dónaill

An archaeologist has described the discovery of the remains of a woman and two children at least 1,000 years old at a dig in the Burren as “very exciting and significant”.

The director of the Caherconnell Archaeological School, Dr Michelle Comber, said yesterday there was “an air of excitement” on the second last day of the eight-week summer dig when the remains were discovered.

She said the remains were of a “45-year-old plus” woman, a baby aged between one and two years and a very young baby.

The school called local gardaí and the scene at Caherconnell, a kilometre from the Poulnabrone dolmen, was photographed.

“The find is unusual and it came as a complete surprise to us,” Dr Comber said. The remains “could be thousands of years old but we won’t know for a couple of months until the results of carbon-dating of the bones are made available”.

They definitely pre-dated the construction of the fort or cashel under excavation at Caherconnell which was built about the 10th or 11th century, she added.

The remains were contained in stone boxes, or cists, buried beneath the wall of the cashel enclosure at Caherconnell. The smaller of the two contained the remains of the children and the body of the woman was in the second one.

“She suffered from joint disease, probably as a result of much physical labour over the course of her lifetime,” Dr Comber said.

She said the excavation at Caherconnell “puts the natives back into the picture of medieval Ireland.

“We know a lot about the Anglo-Normans at this time who built large castles and towns, but this well-off family at Caherconnell was making a statement that they were going to hold on to their culture, their land and cling to their traditions.”

Caherconnell was owned by an important branch of the local Gaelic rulers, the O’Loughlins, in medieval times and it was very possible that the builders of the cashel were ancestors of the O’Loughlins.

Dr Comber said that the 2013 excavation, together with previous excavations at the Caherconnell site, “reflect a wealthy family who wore jewellery of bronze, quartz and glass, who hunted and fought, who farmed the surrounding land and who played games and listened to music”.