Aoibhinn Ní Shúilleabháin: The scientific origins for ‘saints and scholars’

While we might not always celebrate our scientific heritage, it is entwined with our history and culture 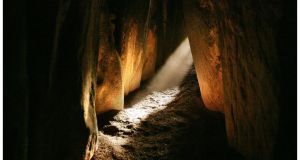 Structures such as Newgrange remain wonderful feats of calculation and engineering of our ancestors. Photograph: Alan Betson

In the most recent research investigating Europeans’ attitudes towards science, 70 per cent of people surveyed agreed that having an interest in science leads to improvements in culture. But what role does science have to play in Irish culture? It is easy to associate music, language, dance, art or story-telling with our national heritage, but does science belong there too?

At a recent talk by Dr Immo Warntjes at the Dublin Institute of Advanced Studies, I was surprised to learn the origins of Ireland’s title as “the land of saints and scholars”. I had thought that the beautiful artistry of manuscripts like the Book of Kells and stories of saints like Brigid were the source of this national title, but it seems this badge of pride comes, in fact, from the scientific habits of mind of our Irish monks. From the sixth to the 15th century the only science of import in western Europe was the computation of the date of Easter. As part of this science, known as “computus”, algorithms had to be invented to calculate the time between Lent and Easter Sunday, which would also align with lunar cycles.

The Irish scholars were the first to accurately calculate when Easter would fall due to their methodical approach to generating and analysing their own data. These monks cast a slightly cynical eye on the adoption of new calendars decreed by Rome and instead tracked the evidence of the night sky and the seasons in their own manuscripts. With this astronomical data, the monks arrived at the most trustworthy way of establishing the date of Easter and Irish manuscripts of these calculations became important commodities across the European continent.

Very soon, employing an Irish scholar as a school or household tutor was de rigueur and our island became known as the source of well-versed scholars. What is even more interesting is that these books were not only written in Latin, but also contained excerpts of Gaelic. The monks not only shared their knowledge with other scholars, but also taught local people in their own language. Our label of “scholars and saints” is therefore rooted in the very early science of our national ancestors.

Springing forward a few centuries, Ireland has contributed to global knowledge of the world around us in many other areas. Robert Boyle, a Waterford man known as “the father of chemistry”, was one of the first scientists in the world to suggest that matter was not made of earth, water, air and fire (as was thought at the time) but was instead made up of smaller particles, which we now know as atoms. Maud Delap, a self-taught marine biologist who studied specimens off the shoreline of Valentia in Co Kerry, made major contributions to understanding the complex life-cycles of jellyfish and other marine life. And we are likely all familiar with the story of William Rowan Hamilton who, in a moment of inspiration, inscribed his quaternion equation on Broom Bridge in Dublin – an equation which is now core to programming 3D graphics.

Science is also woven into our 20th- century culture. In 1939, taoiseach Éamon de Valera welcomed Nobel laureate Erwin Schrodinger as an Austrian refugee to Ireland to continue his research without fear of persecution. While here, Schrodinger wrote his book What is Life? which impacted scientific thinking across the globe and which Watson and Crick (awarded the Nobel prize for discerning the structure of DNA) acknowledged as playing an important role in their success. As well as our many literature and peace awards, we have also won Nobel prizes for splitting the atom and treating parasitic diseases. And, in a melding of the arts and science, let’s not forget that James Joyce himself coined the words “quarks” in Finnegans Wake, which now names these fundamental constituents of matter.

As part our Celtic heritage, the Céide Fields along the Wild Atlantic Way in Co Mayo are located in Ireland’s latest Gold Medal Dark Sky area, where stargazers can flock to admire night-time vistas in a zone of unpolluted light. And, even if a trip around Ireland’s Ancient East might not immediately spark thoughts about scientific research, structures such as Newgrange remain wonderful feats of calculation and engineering of our ancestors. While we might not always explicitly highlight (or celebrate) our scientific heritage, it is entwined with our history and our culture.

The distinction between “science” and “the arts” is relatively modern and in researching new ideas, collaborating on societal issues, and referencing our culture, perhaps it’s time to bridge the divide between these two fields.