27-year-old Roscommon-Galway TD Claire Kerrane says the idea of a united Ireland and Sinn Féin's positions on social justice issues were incentives for her to sign up to the party in her late teens. 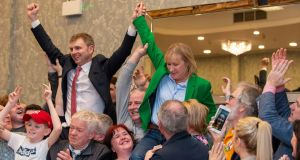 Ruairí Ó Murchú, the newly elected Sinn Féin TD for Louth, was 16 years old when the IRA declared its first ceasefire in 1994.

The issue of Sinn Féin’s association with the IRA and the paramilitary group’s violent past did not emerge as an issue on the doorsteps during the election campaign, said Ó Murchú, while the housing and healthcare crises did.

He drew a contrast between his party’s past associations with the IRA and the campaign of armed conflict in the Troubles and the future hopes of younger voters who backed the party in the election in search of a change from the old Fine Gael-Fianna Fáil political duopoly.

“They accept that that’s it – it is history. It is what happened,” he said.

“There are reasons why these things happened but also they [younger voters] are focused on the solutions we are offering to the problems that they are living with day in, day out.”

Ó Murchú sought to cast Sinn Féin’s history in the Troubles with the older history of Fianna Fáil and Fine Gael and how those two parties grew out of the violence of the Civil War.

“They are no different. The difficulty in Ireland was occupation, it was partition, it was discrimination, and this led to a situation that we all preferred wouldn’t have happened,” he said.

He said Sinn Féin’s younger voters recognise that the party’s leadership “played a huge role in delivering the peace process”.

Almost one-third of the party’s representatives are below that age. The youngest new Sinn Féin TD, Claire Kerrane, in Roscommon-Galway is 27. She was five when the 1998 Belfast Agreement was signed.

The newly-elected Sinn Féin TD for Longford-Westmeath, Sorca Clarke (41), was a teenager when the peace agreement was signed. The IRA had disbanded before she joined Sinn Féin, she said. “The IRA has ceased to exist for decades now,” Clarke said.

When it was put to her that the security authorities in Dublin and Belfast believe otherwise, she said they can “say what they want, that doesn’t make it true”.

Asked if she believed the IRA’s campaign of violence was justified, she said she would never be able to relate to what had gone on on the streets in Northern Ireland during the years of conflict.

She said she was completely satisfied that the IRA did not influence Sinn Féin.

“Absolutely, or I wouldn’t be a member of the party,” she said.

The IRA, she insisted, does not exist.

“These conspiracy theories, they’re a little dated,” she said.

Victorious Sinn Féin candidate in Galway West Mairéad Farrell, whose aunt, also Mairéad Farrell, was one of three IRA members shot dead by the SAS in Gibraltar in 1988 while planning a bomb attack, said that the IRA’s violent past “did not come up on the doorsteps at all”.

“What was very interesting at the doors is that there were people who were lifelong Fianna Fáil and Fine Gael voters and they said, things aren’t going well for the ordinary person in the State,” said the newly elected 30-year-old TD.

“They said they would lend us their vote and that’s what it is – a lent vote to show those people that we will put them front and centre.”

Sinn Féin’s new TD in Tipperary, Martin Browne (54), said that young people had more pressing issues on their minds than the party’s links with the IRA and its violent past.

“We have never said we have supported violence. We understood what was going on in the North. We are not going to condemn what people had to do,” he said.

Browne wondered when questions about Sinn Féin’s connections to the IRA would stop being asked, whether it would be in 20 years, 50 years or 100 years.

“There is history in all parties. It’s time people realise, especially in the national media, that young people have better issues to think about,” he said.