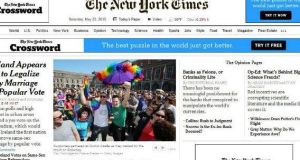 As the first country ever to approve same-sex marriage by popular vote, the world’s eyes were fixed firmly on Ireland.

The vote has featured prominently in media outlets across the globe and contextualised against a backdrop of waning Irish Catholicism, a turn from conservatism and a sense that civil rights have taken another large stride.

The New York Times: “Ireland appeared poised on Saturday to become the world’s first nation to approve same-sex marriage by a popular vote, with early vote counts showing strong and broad support for a measure that would have been unthinkable just a few years ago in what traditionally had been a Roman Catholic stronghold.”

The Guardian: “The expected huge yes vote from the republic’s electorate will mark another major milestone in Ireland’s journey from a Catholic church-dominated state to a more liberal, secular society. Gay rights campaigners said the pro-same sex marriage message from Ireland will also bolster their struggle for LGBT equality across the world.”

The Times of London: “Senior figures in the “no” camp conceded defeat as votes were counted on Saturday, saying the only question is how large the “yes” side’s margin of victory will be from Friday’s vote.”

BBC: “Before Friday, votes had already been cast in some islands as well as hospitals, hospices and nursing homes. Irish citizens who are registered were allowed to vote, but there was no postal voting. Many people returned to Ireland to cast their votes.”

CNN: “As in many other countries around the world, the issue is a polarizing one. And the referendum is being seen as a test of whether in Ireland, a majority Catholic nation, more liberal thinking can trump conservative, traditional leanings.”

Sydney Morning Herald: “Legalising gay marriage would be a seismic change in traditionally Catholic Ireland, where homosexuality was illegal until 1993 and abortion remains prohibited except where the mother’s life is in danger.”

Fox News: “Ireland has voted resoundingly to legalize gay marriage in the world’s first national vote on the issue, leaders on both sides of the Irish referendum declared Saturday even as official ballot counting continued.”

Le Monde: “Just 22 years ago, in 1993, Ireland legalised homosexuality. On Friday, May 22nd, the same country was the first in the world to vote by referendum for the legalisation of gay marriage. For Mr Kenny, it’s a strong signal to the rest of the world that the Irish can be pioneers even in the area of social mores.”