Majority in FF do not want leader’s removal, but many take issue with his operating style 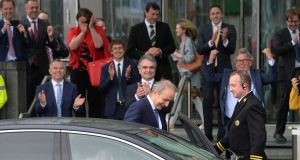 A primary criticism is that Fianna Fáil leader Micheál Martin is disconnected from his own parliamentarians, says one Leinster TD. File photograph: Alan Betson

Late on Tuesday evening, 10 or so Fianna Fáil TDs, mostly drawn from those elected to the Dáil for the first time last February, congregated in a corner of the Leinster House canteen.

Dublin TDs Paul McAuliffe and Cormac Devlin was there. So, too, were James O’Connor from Cork East, Cathal Crowe from Clare and Joe Flaherty from Longford-Westmeath.

The junior minister from Galway East, Anne Rabbitte, one who had hopes of higher office when the Government was eventually formed, joined the group.

It had been a bad day for the Government and a dismal one for Fianna Fáil. The launch of the Covid-19 medium-term plan had recoiled badly with taunts of “Level 2.5” repeated all day.

That was followed by Stephen Donnelly’s Covid-19 scare that shut down the Dáil for a few hours. Then, Taoiseach Micheál Martin had had a testy interview on RTÉ’s Six-One News.

If that was not enough, Galway West TD Éamon Ó Cuív had publicly called for Micheál Martin to be replaced, prompted by yet another awful opinion poll for the party.

The canteen conversation that ensued was informal. Inevitably, though, it turned to the events of the day and the pummelling received by the Taoiseach and Stephen Donnelly.

Some of those present were Martin loyalists. Others are not fans. Quickly, the conversation turned to the pall of negativity surrounding Fianna Fáil, and about why it is Fianna Fáil rather than Fine Gael that is shouldering the blame for every Government mishap.

Some of the group grumbled that the public’s received view of Fianna Fáil’s back benches comes from just a small handful of vocal critics, such as Ó Cuív, Marc MacSharry and John McGuinness.

“There was a lot of annoyance that we were letting a small group of people give the impression that we were all unhappy,” said one TD. Several in the canteen gathering gave notice that they would speak out at the Parliamentary Party meeting on Wednesday. Which they did.

There, Christopher O’Sullivan from Cork South West said the negativity was “sickening”, while McAuliffe said the sniping had to stop. Cathal Crowe said some TDs are using the weekly meeting to “settle scores”.

A few who were not present for the canteen conversation joined in, too, such as Senators Lisa Chambers, Fiona O’Loughlin and Ned O’Sullivan and the Kildare TD James Lawless.

After weeks of unrelenting leaks that gouged at party morale, this was seen as a backlash. It was more complex, however, than Martin loyalists returning the serve.

In reality, criticism of Martin, and especially about his style of leadership, is widespread within the Parliamentary Party and other ranks of Fianna Fáil, with new TDs, particularly, feeling ignored.

The majority, however, do not want Martin’s removal. Blunders such as Golfgate, or the two ministerial resignations, are not his fault, said one: “He’s a bit like Lemony Snicket, hit by a series of unfortunate events.”

Many were very unhappy with Ó Cuív’s intervention. “Micheál is only 10 weeks in the job – you have to give him a chance,” said another TD. “Éamon’s timing was lousy.”

Ó Cuív answered his detractors in a tweet: “When would be the right time? We are on 10 per cent nationally, 4 per cent in Dublin. Should we wait until we are closer to zero?”

There is no question that Micheál will be leading the party for now, but that’s not saying he’s doing a good job

The truth is that a minority agrees with Ó Cuív and find more than a grain of truth in the ever-theatrical Sligo-Leitrim’s Marc MacSharry’s pronouncements.

Says one of the party’s younger first-time TDs. “Some of my colleagues think it’s the media and the Opposition, not us. They are delusional. We have become irrelevant.

“What O Cuív did was silly. It was the wrong bloody time. There is no question that Micheál will be leading the party for now, but that’s not saying he’s doing a good job.”

A primary criticism is that Martin is disconnected from his own parliamentarians, says one Leinster TD who “nearly kicked the TV” when he heard Martin’s RTÉ Six-One declaration that he has visited every constituency.

He has taken decisions unilaterally with no reference to others

“He’s been down here three times and in fairness is very good at canvassing and pressing the flesh. But as soon as it’s over he hops into the car and is gone. You never get to engage with him,” he says.

More than a few complain that Martin gets “tetchy” when faced with criticism: “When he became leader,” says one, “there were only 20 TDs and it was not full of talent. So he took the responsibility on himself.”

That served him well until 2016, but he should have delegated afterwards, but did not: “He has taken decisions unilaterally with no reference to others. Some have worked, like the Eighth Amendment. Others haven’t, such as his decision to extend confidence and supply, and his decision not to deal with Sinn Féin and go into coalition with Fine Gael. That has alienated so many ordinary members.

“Fine Gael and Sinn Féin have leadership teams. Leo has Simon Coveney, Simon Harris, Heather Humphreys and Helen McEntee. Mary Lou McDonald has Pearse Doherty, Eoin Ó Broin and Louise O’Reilly. With Micheál, you don’t get the same sense he has a team around him.”

Equally, many argue that Martin has failed to set out a clear vision for the party. A few were taken aback, even shocked, by his interview with Pat Leahy for The Irish Times “Shared Island” series where it became evident that a united Ireland is way down his list of priorities.

“If Fianna Fáil does not stand for a united Ireland, what’s the point of us being a republican party?” complained a despairing senior colleague.

Dublin Bay South TD Jim O’Callaghan is seen, for now, as Martin’s strongest leadership rival. This week, he was careful not to criticise the Taoiseach but also praised Ó Cuív’s acumen.

Significantly, he confirmed that he is holding Zoom meetings with FF cumainn, a modern-day take on Charlie Haughey’s chicken-dinner circuit when he built his base in the party.

O’Callaghan would go no further than saying it was not an appropriate time for a change. Talking to The Irish Times, however, he focused on the identity of the party, itself an innate criticism.

“The threat to our identity is that for too long we did not say what Fianna Fáil stands for,” says O’Callaghan.

“The party was like an elephant. It was hard to describe, but when you saw it you knew what it was. That does not work any more.”

He continues with an argument that runs counter to Martin’s dispensation on the North. Fianna Fáil, he says, should be a “centre-ground, centre-left national party which wants to reunify the country, build public housing, reward business, protect the vulnerable, protect Irish culture and language and save the environment”.

He continues: “The reasons we were founded in La Scala [theatre] in 1926 are still valid today.

“The desire and need for reunification is stronger because of the impact of Brexit and Covid. People see the illogicality of partition which was a sectarian solution to a political problem and we as a party have the best record in dealing with that issue.

For others such as Ó Cuív, Martin has forsaken another Fianna Fáil precept, the Irish language, by relegating it to a junior portfolio, with a Minister of State who is not a proficient speaker.

“The leader has a huge influence on the direction of the party,” says Ó Cuív. “It’s like a football manager. When the team is playing inconsistently it’s a widely accepted practice that the manager has to go.”

Unhappy about loose talk to the media, James O’Connor from Cork East, Fianna Fáil’s youngest TD, equally believes that younger TDs must be given their head, with roles found for them.

Echoing that theme, Christopher O’Sullivan, from Cork South West, says FF is struggling to reach younger voters: “The parliamentary party is overwhelmingly male, with not enough females or younger people.

“Give us a chance to reach out to the younger voter and encourage female participation. If we constantly have the negative knockabout stuff from the old school, that will inhibit renewal,” he says.

Acknowledging that controversies will “always get airtime”, James Lawless says FF has communications and policy issues to sort out. Most of all, though, it “must tog out and get on the pitch”.