Why any surprise at culture of false solidarity in the Garda Síochána?

Opinion: More than a ‘few bad apples’ in the force 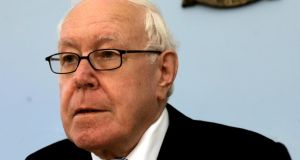 ‘The Smithwick tribunal inquired into allegations that a “mole” in Dundalk Garda station had tipped off the IRA about the presence of the officers.’ Above, Judge Peter Smithwick. Photograph: Matt Kavanagh

On March 20th, 1989, two RUC officers, Robert Buchanan and Harry Breen, were murdered by the IRA, shortly after they (the RUC officers) had left Dundalk Garda station. Immediately there was media speculation that the murders might have occurred as a consequence of a tip-off from within the Garda station.

Ned O’Dea spoke only to those Garda officers who were on duty between 2pm and 4pm on the day of the murders and those who had official advance notice of the meeting with the RUC officers.

He did not examine the station records, such as station diaries, occurrence books or registers. Neither did he enquire into the telephone records relevant to the station.

And while representations had been made to him personally immediately before the murders about concerns regarding the activities of one of the detectives at the station, Owen Corrigan, he failed to get from Corrigan a detailed account of his activities on the day.

This is according to the report of the Smithwick Tribunal, which inquired into allegations that a “mole” in Dundalk Garda station had tipped off the IRA about the presence of the officers.

The then Garda commissioner, Eugene Crowley, and O’Dea concluded they were “satisfied there was no leakage of information by gardaí on the proposed visit of the two [murdered RUC] officers”.

Defective investigation
There was a further Garda investigation into possible collusion on the part of Dundalk gardaí in the murders of Buchanan and Breen, following media claims in 2000 of collusion by Dundalk gardaí with the IRA. This was conducted by detective chief superintendent Sean Camon, the then head of the National Bureau of Investigation.

It too proved defective primarily, according to the tribunal, in that it failed to interview senior politicians who then were making claims of Garda collusion, thereby ignoring what might have been valuable “leads”.

The tribunal also heard evidence from a retired Garda chief superintendent, Tom Curran, who was based in Monaghan around the time of the RUC murders.

He said he had known Buchanan and that in 1987 the RUC officer had told him the RUC had information that Corrigan was associating unnecessarily with known members of the IRA, an association that “went far beyond” the degree of association required for detective work.

(The tribunal reached no finding of collusion by Corrigan with the IRA in respect of the killing of the RUC officers. The High Court has since granted permission to him to challenge the Smithwick finding that he gave information to the IRA about a man it later murdered).

‘He didn’t want to hear it’
Curran told the tribunal he had gone to the then assistant commissioner in charge of crime and security, Eugene Crowley (later commissioner). He said: “he [Crowley] was reading a file when I went in [to his office] and I told him the purpose of my visit and I told him the information that had been passed to me by Bob Buchanan and all the bits, hearsay that I had heard about Owen Corrigan. When I finished – he kept looking at the file but when I was finished to me he said: ‘How are things in Monaghan town?’. So we discussed activities in Monaghan, but he never mentioned anything in relation to the conversation that I went there to tell him. In a very short time I got the opinion that he didn’t want to hear it, so I left.”

Curran gave further evidence to the tribunal that a member of the IRA had told him Buchanan was going to be shot by the IRA and that he had forwarded this information to Garda headquarters and, apparently, nothing happened.

So it is hardly news that on matters of far lesser import there is carelessness and indifference within the heart of An Garda Síochána. But more crucially, that official internal “investigations” are slipshod and, in many insistences just part of a cover-up, whether so intended or not.

What is surprising is the surprise.

We have known for some years now about the Garda shenanigans in the Ian Bailey case: how, on the basis of the flimsiest of evidence gardaí became convinced he was the perpetrator of the murder of Sophie Toscan du Plantier and how, in pursuit of him, witnesses are alleged to have been pressured.

Familiar cliches
This is not a recent phenomenon. Journalists and lawyers have known about this for years, while politicians have cowed behind the now familiar cliches: the vast majority of the force are “decent, conscientious police officers just getting on with their job”.

The problem is that “decent, conscientious police officers just getting on with their job” have been caught in a culture of false solidarity and concealment.

But at last there seems to be an appreciation that it is not just a problem of “a few bad apples”, it is systemic issue which will take perhaps a generation or two to wash out, if now comprehensively addressed.