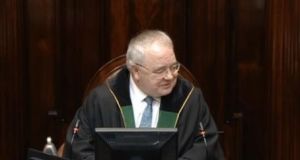 Seán Ó Fearghaíl is a former Fianna Fáil chief whip who served as the ceann comhairle in the last Dáil. He was the first person to be elected as ceann comhairle by secret ballot, in 2016. Previously, the government of the day would simply choose who would take up the role.

He has now been re-elected to that position for the term of the 33rd Dáil. Aged 59, he is married to Mary Clare Meaney, and they have one son and three daughters. Mr Ó Fearghaíl has served as a councillor, senator and frontbench spokesman. He relentlessly pursued a Dáil seat in Kildare and was successful on his fifth attempt.

The position of ceann comhairle commands a total salary of €175,699 – on a par with that of a Cabinet Minister – and the holder of the office also has the service of a full-time driver funded by the State.

As well as being the speaker or chair of the Dáil, the ceann comhairle is also chair of the Dáil’s Committee on Procedure and the Houses of the Oireachtas Commission, the body responsible for running Leinster House.

Mr Ó Fearghaíl is well liked across the political spectrum and this was evidenced by his resounding victory over Independent TD Denis Naughten for the position on Thursday: he won by a margin of 130 votes to 28. Those close to him say he is fair-minded and has a genial personality. While he was dressed in his robes on Thursday in front of TDs in the Dáil, he remarked that journalists had submitted Freedom of Information requests to ask for the dry-cleaning costs of the robe.