What does Sinn Féin have up its sleeve for 2016?

Analysis: Video mapping to bring GPO ‘back under shellfire’ for Easter Rising centenary 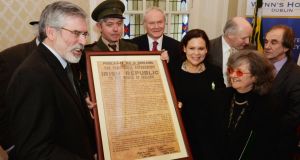 Beginning with the re-enactment of a funeral (Jeremiah O’Donovan Rossa’s) and concluding with the commemoration of an execution (Roger Casement’s), the Government’s year-long programme of events for the 100th anniversary of the 1916 Easter Rising has been well received.

Letter writers to The Irish Times have their say here.

No doubt all parties are planning to have a special Easter Rising surprise up their sleeve in 2016, but Sinn Féin has even hired its own national programme co-ordinator for the commemorations, one Bartle D’Arcy.

If Bartle D’Arcy sounds like a Joycean character, it’s because he shares a name with the tenor who sang The Lass of Aughrim in the author’s story The Dead.

The modern-day D’Arcy, a long-time Sinn Féin member who insists he has no personal political ambitions, is from Westmeath and has a background in tourism and event management.

He applied for the job and says he is now director of a non-profit company set up outside Sinn Féin called Ireland 1916 Commemorations Limited. Money raised will go “back into commemorations”, he says.

Over five nights from April 24th, 2016, the party intends to use state-of-the-art 3D video mapping techniques to project a free theatrical show onto the facade of the GPO on O’Connell Street.

“With this technology we’ll be able to bring the GPO back under shellfire,” D’Arcy explains. “You’ll see rebels arrive at the GPO and break the windows.” (The actual windows will be protected and will remain intact, hopefully).

Sinn Féin has also booked the Ambassador Theatre on Parnell Square South for 33 weeks from February 27th, 2016. It has already recruited a team of actors to dress up as Pádraig Pearse and deliver midday readings of the Proclamation outside the theatre. “It’s not going to be one poor individual for 33 weeks,” D’Arcy explains.

On display inside the exhibition will be artefacts including “the GPO door handle” and original uniforms worn during the Rising, which Mr D’Arcy says have been provided by the Irish Volunteers Commemorative Organisation.

There is, of course, one other big political event planned for 2016.

That’s a matter known as a general election - and the latest possible date for that particular extravaganza is April 9th next year.