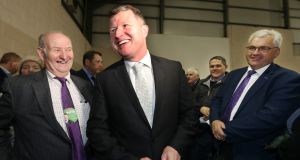 He was deemed elected with 18,830 votes after the elimination of Labour’s George Lawlor who secured 14,476 votes after sizeable transfers from Sinn Féin and the Green Party.

Fine Gael’s Verona Murphy was eliminated on the fourth count. She said afterwards that she plans to run in next general election.

Speaking after his election, Mr Byrne referenced the controversy which engulfed Fine Gael’s Wexford campaign. Ms Murphy, president of the Irish Road Haulage Association, made a number of comments during the campaign about the Islamic State (ISIS) and immigration.

After his elimination, George Lawlor said his strong result showed that the “Labour party flag is well and truly alive in the constituency of Wexford.”

Ms Murphy indicated that she planned to run in the general election.

“What we do now is build on this for the general election. Of course I am disappointed but at the same time it is my first outing as a politician against some very experienced candidates.”

Asked if she could have won had she not made her comments about immigration, she said that she had apologised.

Asked if she felt she had the backing of the Fine Gael party, she said: “that is all for another day.”

1 Donald Trump is in trouble, and that could spell very bad news
2 ‘White Irish people have never had to think about this’
3 ‘Summer is not lost’ - Taoiseach announces accelerated easing of coronavirus restrictions
4 Tyrone midwife on the cover of Vogue magazine
5 Coronavirus: People to be allowed to travel anywhere in their county from Monday
Real news has value SUBSCRIBE