Westminster poll is ‘election of a generation’, says Sinn Féin 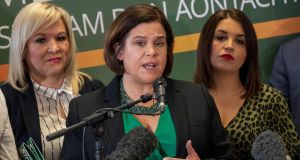 The Westminster poll is the “election of a generation” and in terms of the contest in North Belfast, an opportunity to create a “political earthquake”, senior Sinn Féin figures said on Monday at the party’s manifesto launch.

The launch was held in the Playhouse Theatre in Derry where outgoing Sinn Féin MP Elisha McCallion is seeking to defend her Foyle seat from SDLP leader Colum Eastwood. Mark Ward, who won the byelection in Dublin Mid-West, also joined Sinn Féin candidates at the launch.

The party’s president Mary Lou McDonald said the dominant theme of the election was a “rejection of Brexit” but referring to public demands for a return of the Northern Executive and Assembly she added it also was an opportunity to “vote for the re-establishment of sustainable good government here”.

Candidates from all parties have been told on the doorstep of the public’s anger and frustration at the absence of Stormont, particularly due to the health crisis which has led to waiting lists of three years. Current industrial action by nurses and other health workers has resulted in the cancellation of 10,000 outpatient appointments and surgeries in Belfast.

She said there were a number of outstanding issues that had to be resolved including an Irish language act. “Can this be done? Absolutely,” she said. “You could do this in a day.”

Ms McDonald said the Westminster poll would be the “election of a generation because Brexit has changed everything for all of us”.

She again defended Sinn Féin’s House of Commons abstentionist stance, saying that in relation to the UK quitting the European Union “no Irish MP, be they nationalist, unionist or otherwise, will decide the matter of Brexit”. The matter had been decided by the English public who voted to exit the EU and would be shaped in the first instance by English MPs who by far had the majority in the House of Commons.

It was “fanciful and frankly dishonest” to argue that Northern Ireland MPs could have influence in the “House of Chaos at Westminster”. Westminster was a “dead end, a cul de sac,”she said.

“Irish interests have been and will be defended through the Irish Government (and) the EU 27 who sit on the other side of the negotiations,” she said. American support also would assist, Ms McDonald added.

Sinn Féin is aiming to hold its current seven seats and also for John Finucane to defeat the DUP’s deputy leader Nigel Dodds in North Belfast. “Nigel Dodds revelled, along with his DUP colleagues, in their recklessness. They wore as a badge of honour that they had pushed this crazy Brexit agenda,” said Ms McDonald.

“The DUP need to be called out for aggressively promoting an agenda that can bring nothing only hardship, difficulties, job losses and economic hardship to people across the board.”

The outgoing Sinn Féin MP for Fermanagh-South Tyrone Michelle Gildernew who is defending her seat from Ulster Unionist Tom Elliott said that winning North Belfast would create a “political earthquake” and be an “absolute game changer”.

The Sinn Féin deputy leader Michelle O’Neill also said her party wanted a successful conclusion to the talks process because confidence in politics in the North was “broken” and needed to be rebuilt. “That is going to take all political parties working together, and that is going to mean we need to see delivery on the outstanding issues, that is going to mean reforming an Executive that is both sustainable and credible,” she said.

North Belfast candidate Mr Finucane said Westminster would never act in the interests of the people of Ireland. “The current impasse is unacceptable and unsustainable. We need a genuine powersharing Executive in place delivering for all on the basis of equality,” he said.

Foyle candidate Ms McCallion said that across the island “people were recognising that their future is best served here at home in the context of Irish unity – every day more and more people realise this”.

The manifesto calls for moves to Irish unity and a rejection of Brexit and reaffirms Sinn Féin’s commitment to the Belfast Agreement and to re-establishing the powersharing institutions.

Holohan warns of up to 1,000 Covid-19 deaths in January, calls for tighter air travel rules 12:55
Covid-19 patients in hospital remain at high levels as lockdown extension expected 12:13
Everyone in Ireland to get Covid-19 vaccine by September, Minister for Health says 12:12
Inspector who highlighted mother and baby homes to be remembered through scholarship 11:07
Mandatory travel quarantine should be introduced by Ireland, experts urge 09:58