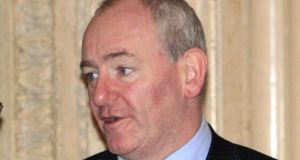 SDLP leader Mark Durkan, who has retained his seat in the Foyle constituency in Co Derry. Photograph: Peter Muhly/AFP/GettyImages

The SDLP’s Mark Durkan comfortably retained his parliamentary seat in the Foyle constituency in Co Derry, with his biggest ever winning margin since succeeding former party leader John Hume to the seat in 2005.

Mr Durkan’s increased majority came despite a lower poll in this year’s vote compared with the 2010 general election, when he had a majority over Sinn Féin of 4,824 votes.

In third place came the DUP’s Gary Middleton, who in his acceptance speech said: “Not bad for a 24-year-old.”

The only woman on the Foyle constituency ballot paper, Julia Kee of the UUP, came fourth, in her first political outing.

ln his acceptance speech, Mr Durkan referred to recent attacks on the homes of Sinn Féin members during the election campaign, including the home of deputy first minister Martin McGuinness, and said that he stood in solidarity with those who had been attacked or threatened.

“It is important that we continue to promote our different arguments through the democratic process, and tonight I stand in solidarity with those in other parties who have been victimised or threatened in any way. This election is a victory for everyone who took part in the democratic process,” Mr Durkan said.

Conservative Party’s victory – what it means for Ireland

Party leader, beaten by Tory candidate, said he would resign if he failed to be elected

11 things you should know about the UK election result

Cameron, the DUP, the resignations, the shock of it all...

Leaders of Labour, Lib Dems and Ukip resign as Cameron secures a second term as PM

How did the opinion polls get it so wrong?

Analysis: Cameron set for Number 10 as recriminations begin in Labour and Lib Dems

Much laughing and nervous hovering for first results

Northern Ireland: The story of 18 seats won and lost

News from each of the 18 constituencies, with all seats illed

Conservative majority would be a nightmare scenario for Ireland