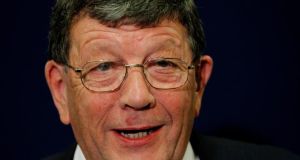 There were no surprises in the West Tyrone constituency during the Northern Ireland election, where incumbent MP Pat Doherty of Sinn Féin was returned with 16,807 votes.

Speaking after his fourth win in the area, he described West Tyrone as a “Republican constituency”.

Mr Doherty said Sinn Féin would be moving forward with its “project of reunification”, to cries of “Never, never” from some of his Unionist opponents. Some of his supporters responded by shouting “Tiocfaidh ár Lá ”.

Speaking at 1.45am on Friday, he noted that the make-up of the British government was not yet known, but called on politicians of all stripes in Northern Ireland to unite and stand together against austerity.

“We have to face the next incoming British government as a collective in terms of the Assembly at Belfast to say to them, ‘We cannot take any more of these cuts,’ and that we stand together against these austerity policies which are destroying all facets of society here.”

Mr Doherty said the next phase of Northern Ireland’s development was reconciliation and that that was not something Unionists should fear.

“The question of reconciliation shouldn’t be seen as a barrier. It should be seen as a genuine challenge to all of us,” he said.

Born in Glasgow to Co Donegal parents, Mr Doherty (69) moved back to live in the county in 1968.

DUP candidate Tom Buchanan secured 6,747 votes and Daniel McCrossan of the SDLP got 6,444. Ross Hussey of the UUP recorded 6,144 votes.

The Alliance candidate Stephen Donnelly got 869 votes, while Ciaran McClean of the Green Party got 780. The Cannabis is Safer than Alcohol candidate recorded 528.

Conservative candidate Claire-Louise Leyland got 169 and Susan-Anne White, an Independent, 166.