Water cap for families may be set at €300

Water charges would be well below non-registration fee of €424

Speaking outside Irish Water headquarters in Dublin today, Minister for the Environment Alan Kelly indicated that he expected changes to the water charges regime to be announced in the next week or so. He said the water charges would be "modest". Irish Water managing director John Tierney apologised to customers. 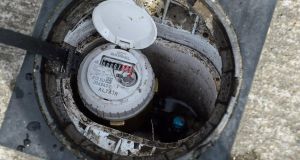 Lower charges for families are understood to apply until metering, and the moves are designed to allay political anxiety about households who feared they would have to pay €800 or €900 annually. Photograph: Cyril Byrne

The Government is considering measures to ensure the total water charges bill for families with adult children comes in well below the maximum €424 that will be levied on households that fail to register with Irish Water.

While the broad thrust of the Coalition’s revised water package has now emerged, the Economic Management Council (EMC) will meet again this week to consider the plan in further detail.

The Cabinet holds its weekly meeting today, while the EMC meets tomorrow. Minister for the Environment Alan Kelly last night said the final plan would be unveiled next week, promising the charges would be “modest”, and Taoiseach Enda Kenny said the Government would bring clarity on the issue “very soon”.

Coalition sources said the issue of dependent children was likely to be dealt with through a family water charges cap, with speculation it may be around the €300 mark, ensuring it is well below the €424 automatically levied on those who do not register.

The Commission for Energy Regulation earlier this year said householders who failed to register with Irish Water would face an annual charge of €424. The regulator said this would be made up of the average charge of €278 for two adults – and they would not receive the annual free allowance of €146 a year.

Despite a number of Labour politicians calling for a referendum to ensure public ownership of water is enshrined in the Constitution, privatisation concerns are likely to be dealt with through legislation.

At a parliamentary party think-in yesterday, Fianna Fáil considered adopting a policy of abolishing Irish Water and pausing the introduction of charges among other options.