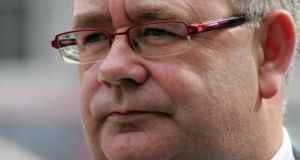 The controversy over voting in the Dáil has “further eroded confidence in how our national parliament conducts its business”, Ceann Comhairle Seán Ó Fearghaíl has said.

Mr Ó Fearghaíl told the Dáil that the incident last week – in which Fianna Fáil TD Niall Collins voted six times for party colleague Timmy Dooley while he was absent from the chamber – was a “political failure” and it was up to the House to deliver the solutions now required.

He said politics “is an honourable profession” and politicians must conduct themselves professionally.

“It is a matter of deep personal and professional regret to me that this did not happen last week,” he said.

He said the report into the events of last week was “factual and evidence-based”. It made no findings against any individual, but the facts “are stark and unpalatable”, he said.

He said it was sobering to reflect on the voting irregularities “and under no circumstances can they be allowed to happen again”.

The Constitution required members to be present in the House when voting and there could be no deviation from this, he said.

“When errors are made in life they should be admitted and learned from and I would apply this maxim to what happened last week.”

He said there were a number of complaints that have been made under the Ethics in Public Office Act.

Mr Ó Fearghaíl said those complaints must be allowed to take their course and it was for the committee on members interest to examine the matter and make recommendations.

He said there would be statements on the issue in the Dáil later and “it is [HIS]sincere wish that members read the report before they express their views”.

“Members are expected to recognise and show respect for the institution for parliament and for each other,” he said.

He reminded TDs of the code of parliamentary standards that “members belong to an institution that is a cornerstone of and plays a central part in our democracy”.

He said: “They have a fundamental duty to behave in a manner that supports and reflects this and should endeavour to avoid comment or action that undermines the institution of parliament and how it is perceived.”