Villiers: Sinn Féin should ‘stand by what they agreed’ on reform 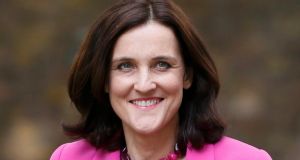 Theresa Villiers arrives at 10 Downing Street on Monday as David Cameron names his new cabinet. ‘It is not possible to insulate the Northern Ireland Executive from the kind of difficult decisions that every single other elected administration in the Western world has had to make,’ she said. Photograph: Reuters/Stefan Wermuth

Sinn Féin must “get to grips” with Northern Ireland welfare cuts because the British government will not pay for a more generous welfare system than exists elsewhere in the UK, the newly reappointed Northern Secretary has said.

Ms Villiers said there had been meaningful discussions about welfare over the past few weeks, “but, frankly, it is difficult for those ever to take place during a general election”.

She dismissed speculation that direct rule by London is looming.

“I think we are some way off that, to be honest.” she said. “Without a budget, the institutions will become increasingly dysfunctional and unable to carry out their basic functions, so it does jeopardise their credibility and even their sustainability. But I don’t see that we are at a cliff edge of imminent direct rule.”

Facing calls from Alliance Party leader David Ford to put pressure on Sinn Féin to reach a deal on welfare, Ms Villiers said Mr Ford knew “perfectly well” that she can not “order them to take a different position”.

“That is what devolution is all about. If you want to persuade parties, you have to do it by convincing them. There is nothing mandatory that you can do to change their mind.”

However, Ms Villiers warned that Northern Ireland’s budget would quickly become “dysfunctional” unless a deal was reached.

Asked if she feared Sinn Féin’s stand was being dictated by its ambition to make gains in the general election in the Republic, due next year, Ms Villiers replied: “Regardless of what is driving this, it needs to be fixed.”

She added: “Martin McGuinness, Gerry Adams have been negotiating in some shape or form for 20 years. They signed up to a package of top-ups on welfare reform, which they for many months hailed as a great triumph. It was a generous package, a sensible package.

“They should stand by what they agreed. Yes, there may have been some misunderstanding, but they agreed it, they signed up for it, they went out and championed it. It is a good deal for Northern Ireland,” Ms Villiers told The Irish Times.

“It is not possible to insulate the Northern Ireland Executive from the kind of difficult decisions that every single other elected administration in the Western world has had to make over the last few years.

“It simply isn’t possible for it to be absolutely completely unaffected,” she said. “We have done our very best in terms of the generosity of the settlement that we have given and we have supplemented it even further.”

Ms Villiers expressed hopes that an agreement can be reached.

“I believe that we can get through this issue. It will continue to be difficult because austerity is not at an end. But this has to be done, because unless it is the Executive’s finances become increasingly dysfunctional.”