Most dissident attacks in North last year were foiled, according to head of security services 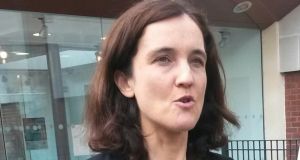 MI5 has been refused surveillance warrants by Northern Ireland secretary Theresa Villiers, a watchdog has disclosed.

The Intelligence Services Commissioner said the Northern Ireland Office (NIO) took great care when considering requests from the counter-terrorism agency and paperwork was in good order.

But Sir Mark Waller expressed concern about the breadth of language used to define the subjects on two urgent warrants, one which included intrusive surveillance.

He said: “The Secretary of State for Northern Ireland shows a keen interest in the case for necessity and proportionality.

“She can and does refuse warrants.”

Intrusive surveillance can only take place in support of one of the functions of the intelligence services in relation to the activity specified in the warrant signed by the Secretary of State.

Dissident republicans opposed to the peace process in Northern Ireland pose a severe threat and have killed policemen, soldiers and a prison officer.

MI5 took on responsibility for national security intelligence work in Northern Ireland in 2007.

Most dissident attacks in Northern Ireland last year were foiled, according to the head of the organisation.

Andrew Parker, the director-general of the British Security Service, said of more than 20 such incidents, most were unsuccessful and that up to four times that amount had been prevented.

Late last year, secret MI5 recordings at a house in Newry, Co Down, led to the arrest of 12 men during a police sting operation.

Sir Mark said: “In Northern Ireland I was concerned with the breadth of language used to define the subjects on two urgent warrants, one of which included an intrusive surveillance authorisation.

“However after challenging the Northern Ireland Office (NIO) I was reassured that they were keeping a very close eye on the use of the warrants and that the Secretary of State expected to be notified of any use.

“I was satisfied that the urgency of the warrants was necessary and that the correct procedures had been applied but recommended that the renewal submission, which had to take place within two working days, should reflect the limitations being applied by NIO to the use of the warrant.”

The commissioner published his report for 2014 recently.

He said: “Generally NIO take a great deal of care looking at the submissions from MI5 and asking questions to clarify what is required by the Service before submitting to the Secretary of State.

“I have asked NIO to inform me of any cases where either NIO or the Secretary of State has had doubts.

“I am not looking to second guess the decisions but would like to see the consideration given to each case and discuss this.”

He assessed whether the surveillance was proportional.

“The case for proportionality was set out clearly in the paperwork I reviewed.

“The language of submissions should reflect any limitations applied to the use of the warrant.

“When authorising a warrant the Northern Ireland Secretary may put limitations on that warrant for example by setting a time for her to review it. I regard such limitations as good practice.

“The paperwork provided by NIO was in good order.

“I made a number of recommendations, mostly around the area of thematic property warrants which I will monitor.”