Timmy Dooley was not in his Dáil seat during a time on Thursday when six electronic votes were recorded in his name. Video: Oireachtas 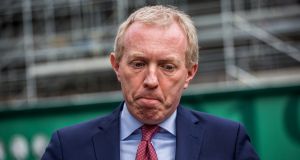 Timmy Dooley was not in his Dáil seat during a time on Thursday when six electronic votes were recorded in his name. File photograph: James Forde/The Irish Times

Taoiseach Leo Varadkar has said he is not aware of any Government TD being voted for while absent from the Dáil chamber as the controversy intensified over electronic votes.

Speaking in Dublin Mr Varadkar said the issue was primarily “a matter for Fianna Fáil” after it emerged that Niall Collins voted six times for party colleague Timmy Dooley while he was absent from the chamber during the weekly bloc voting session on Thursday.

The two senior TDs have stood down from the frontbench at the request of Fianna Fáil leader Micheál Martin, pending the outcome of an investigation by Ceann Comhairle Sean O Fearghaíl.

Mr O Fearghaíl has asked the clerk of the Dáil to urgently prepare a report on the conduct of the votes. “The integrity of the voting system in Dáil Éireann is of the utmost importance,” he said.

The Taoiseach said an investigation by the Ceann Comhairle was appropriate and he was “not aware” of any Government TDs engaging in similar behaviour.

Mr Martin asked the two senior TDs to step aside “without prejudice” from the party frontbench pending the outcome of the Ceann Comhairle’s investigation into the controversy about voting for an absent TD.

“I agree with the Ceann Comhairle that the integrity of the voting system in Dáil Éireann is of the utmost importance. It must be protected and it must be respected at all times,” he said.

“Mr Martin said the two men had agreed to his request. “And I think that underlines the seriousness with which I take this issue. I think it’s important that the Ceann Comhairle’s inquiry now gets underway.”

Mr Dooley, the party’s communications, climate change and environment spokesman told The Irish Times on Saturday he understood his colleague Mr Collins, a TD for Limerick and Fianna Fáil’s foreign affairs spokesman, voted on his behalf.

Mr Dooley said he was present in the Dáil on Thursday and “I left the chamber to take a phone call.”

“I understand from Niall Collins, that under the mistaken belief that I was at the back of the chamber on the phone, he pressed my voting button.”

He said “I have spoken to the Ceann Comhairle today, to explain what happened and apologise for the misunderstanding.”

Mr Collins confirmed he voted for Mr Dooley, adding that he did so without being asked.

“I thought he was up the back of the chamber, in the lobby, on the phone up there, but when I checked it with him, he had actually exited the chamber,” he said.

Mr Martin cautioned Fine Gael to be “careful” in its criticism. “I think we’ve learned from Fine Gael’s internal inquiry into the Maria Bailey case how limited and how unsatisfactory an internal review can be by a political party. It can lack transparency and lack the necessary full candour that investigations like this require”.

Mr Martin said he did not believe the practice was “commonplace” to place a vote for an absent TD. “It hasn’t been my experience.”

He also called for last Thursday’s Dáil votes to be retaken.