Varadkar: election can be avoided but I won’t throw Tánaiste under the bus

Speaking on RTÉ News, Taoiseach Leo Varadkar insists he will not be seeking the resignation of Tánaiste Frances Fitzgerald for a “trumped up charge”. Video: RTÉ News 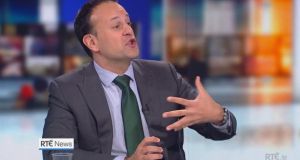 Taoiseach Leo Varadkar on RTÉ’s Six One News on Friday

Taoiseach Leo Varadkar has said there is still an opportunity to avoid a general election and will discuss compromises over the next few days.

However he insisted this evening that he would not be seeking the resignation of Tánaiste Frances Fitzgerald for a “trumped up charge” and said she had done nothing wrong.

Mr Varadkar said that if Fine Gael and Fianna Fáil have not solved the political crisis by Tuesday there would be a general election and that any election would not be postponed until mid-January.

Asked if he would accept the resignation of Ms Fitzgerald, Mr Varadkar said: "I do not believe that is going to arise. I haven’t sought her resignation, she has not done anything wrong.”

Mr Varadkar said seeking Ms Fitzgerald’s resignation would be “throwing a good woman under the bus” to save himself and the Government.

“I do not believe the decapitation of Frances Fitzgerald on trumped up charges is fair,” he added.

The meeting between Mr Varadkar and Mr Martin ended around 4.30pm, having lasted around an hour. While no resolution was reached both leaders will meet again on Saturday.

A spokesman for Mr Martin said the discussion was “frank and open” and both agreed an election was not wanted.

It follows a decision by Fianna Fáil to table a motion of no confidence in Tánaiste Frances Fitzgerald and Mr Varadkar’s insistence he will not seek the resignation of his deputy.

The minority Fine Gael-led Government relies on the support of Fianna Fáil to stay in power through a so-called “confidence and supply” deal. The Independent Alliance, which is in Government with Fine Gael and includes Minister for Transport Shane Ross and the Ministers of State Finian McGrath and John Halligan, was due to meet the Taoiseach at 7pm on Friday.

Mr Martin said his party’s motion could be “pulled back” if the Minister resigned. But the Taoiseach has rejected Fianna Fáil’s demand to remove Ms Fitzgerald and in the absence of a compromise, senior Government figures are considering holding a general election in December.

In another development, Sinn Féin president Gerry Adams has said he will not lead the party into any snap general election this winter. Should an election take place, his party would be led into it by Mary Lou McDonald, Mr Adams said.

Fine Gael figures believe that Fianna Fáil will have to follow through on tabling a motion of no confidence in the Dáil on Tuesday of next week in order to formally break the confidence and supply agreement.

An emergency meeting of the Fine Gael national executive has been called for Saturday.

The crisis centres around Opposition allegations that Ms Fitzgerald, who was minister for justice between 2014 and 2016, was aware of a campaign by the legal team of the former Garda commissioner Nóirín O’Sullivan to undermine the whistleblower Sgt Maurice McCabe at the O’Higgins commission, which was established in 2015 to look into the sergeant’s claims of corruption and malpractice.

At a Fianna Fáil meeting on Friday Mr Martin said the party could not support the retention of Ms Fitzgerald in office, a view that was widely supported. Mr Martin said it now looked as if Fine Gael wanted an election. He blamed the crisis on the Government’s failure to adequately answer questions from Alan Kelly, the former deputy leader of the Labour Party, about the Sgt McCabe issue.

Mr Martin told RTÉ radio’s Today with Sean O’Rourke programme that he had gone to the Taoiseach quietly last Wednesday to explain Fianna Fáil’s problem with what was happening. “He didn’t even engage. I had to take the initiative the next day.”

Mr Martin said that he did not want a general election but that his party could not support Ms Fitzgerald. “The Tánaiste should step aside. That would avoid a general election. This can be avoided if the Government takes action.”

He said the fundamental issue was that the Government was complicit in the legal strategy to discredit Sgt McCabe. He asked why an agent of the State was pursuing such a strategy against a man despite knowing the charges were bogus, and why legal representatives of the Department of Justice did not object to the strategy. “This is an enormous issue. This is not about Micheál Martin. It’s something that is at the core to every citizen of this country.”

Fine Gael, which met on Thursday night, has insisted the Tánaiste did nothing wrong and should not be forced from her position. The party unanimously passed a motion supporting Ms Fitzgerald at the meeting.

Sinn Féin has also tabled a motion of no confidence.

Earlier on Friday, Government sources signalled that an election could take place around December 15th, the day of a crucial European Union summit that will decide if Brexit talks should proceed to the next phase, although sources later said the following week - in the run-up to Christmas Day - was more likely.

The Government and Opposition have both billed the summit as hugely significant, as Mr Varadkar could wield an Irish veto at the European Council if he deems that the Border has not been sufficiently dealt with, so halting the Brexit talks.

Although Fine Gael officials were told to have the party ready by mid-January for an election, senior Government sources said this could mean “four weeks of a caretaker administration at such an important time”.

There is no indication of a specific plan for an election date, however. Senior Fianna Fáil figures are increasingly resigned to a poll, with one senior source saying an election is “98.5 per cent certain”. Getting the party ready for a pre-Christmas poll would cause huge difficulties, it is understood.

The Government is also understood to have contingency plans to allow the passage of a number of pieces of legislation, including the finance Bill and the social-welfare Bill, before Christmas, with an election to follow.