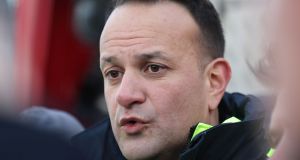 But the outcome of a meeting between Mr Varadkar and Fianna Fáil leader Micheál Martin on Tuesday is being interpreted in both parties as meaning “not yet” rather than “never”, with senior sources expecting negotiations on a coalition government after St Patrick’s Day.

Mr Martin said after the meeting that Fianna Fáil was “willing to engage and that we were of the view that both parties should commence discussions even on an exploratory basis in terms of policy, in terms of a programme for government”.

Mr Martin said the Taoiseach “didn’t reject anything” – though it is clear that Mr Varadkar did not accept the invitation on government formation talks.

The two men agreed to meet again, though no date was set. That meeting is not likely to happen until after the Dáil meets again on Thursday of next week, sources said, when the Dáil is expected to again fail to elect a taoiseach.

In a statement after the meeting, Mr Varadkar said that Fine Gael is continuing to prepare for opposition.

Mr Varadkar is due to meet his parliamentary party on Wednesday, but he is unlikely to seek a mandate from them to open negotiations with Fianna Fáil.