US nominates Missouri lawyer as next Irish ambassador 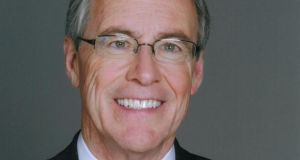 Kevin O’Malley, a second-generation Irish American, is to be the next US ambassador to Ireland.

The White House has announced that it has nominated Missouri lawyer Kevin O’Malley as the next US ambassador to Ireland.

The move brings to an end the longest period for which the diplomatic role has been vacant.

A well-known trial lawyer with a long record of public service, Mr O’Malley, a second-generation Irish American, is to fill the role almost 18 months after the last US ambassador, Pittsburgh Steelers owner Dan Rooney, left Dublin.

A prominent community leader in St Louis, he is a former officer in the United States Army Reserve and served as a federal prosecutor for 10 years in the Office of Organised Crime and Racketeering in the US Department of Justice and as assistant US attorney in St Louis.

He also teaches law at the Washington University School of Law in the city.

Mr O’Malley studied for the priesthood in a Catholic seminary for a time and is a prominent parishioner in the Catholic diocese in St Louis.

In 2009, he was appointed by Missouri governor Jay Nixon as the only non-physician member of the Missouri Board of Registration for the Healing Arts, the state’s licensing and disciplinary body for physicians.

Mr O’Malley, whose grandfather came from Co Mayo, is married with one son.

The longest delay in the appointment of a US ambassador to Ireland previously was 13 months, recorded in the mid-1930s during the presidency of Franklin D Roosevelt.

Senior figures in the Irish-American community criticised the delay in appointing a top US diplomat to Dublin, with Democratic congressman Joe Crowley being the most recent prominent individual to voice concern.

Last week, during the visit of Sinn Féin leader Gerry Adams to Washington, Mr Crowley called for the Obama administration to be more engaged in the Northern Irish peace process by appointing a US ambassador as soon as possible to have a presence in Dublin.

Mr O’Malley’s appointment has to be confirmed by the Democrat-controlled Senate.

The Tánaiste and Minister for Foreign Affairs, Eamon Gilmore, has welcomed the announcement.

He stated: “I am delighted that President Obama has announced his decision to nominate Mr O’Malley as the next US Ambassador to Ireland. This reflects the commitment which he gave to the Taoiseach at their St Patrick’s Day meeting in Washington DC.

“It is important that there be a resident US ambassador here, to reflect the extraordinary strength and depth of the relationship that exists between our two countries.”