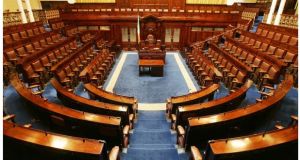 The write-off of almost €5,500 in unpaid Dáil restaurant and bar tabs has been described as ‘simply inexcusable’ by the Social Democrats.

The write-off of unpaid Dáil bar tabs has been described as “simply inexcusable” by the Social Democrats.

The recently-published Houses of the Oireachtas Commission annual report revealed that almost €5,500 in unpaid Dáil restaurant and bar tabs had been written off.

One of the accounts that was written off dated back to 2000.

The bulk of money, €4,717.06, was owed to the members’ restaurant and a self-service restaurant.

The remaining €765.23 was owed to the two bars in the Leinster House complex, one of which is exclusively for the use of TDs and Senators.

“Members who repeatedly fail to clear their tabs promptly should face sanctions from the committees on procedure and privileges of both houses,” Social Democrats co-leader Róisín Shortall said on Monday.

“It’s simply inexcusable that the outstanding bar expenses of TDs and Senators are being written off at public expense.

“The fact that so many bills have gone unpaid shows total disrespect for the people who put members here in the first place.”

Ms Shortall called for a “transparent and efficient system” under which all TDs and Senators would be required to clear their outstanding bills by the end of every month.

A revised credit policy is being developed and will be presented to the Houses of the Oireachtas Commission before the end of the year.

A number of former Oireachtas members, some of them elderly, are understood to have had their bills written off because there was “no realistic prospect of recovery of the sums due”.

Fine Gael Senator Neale Richmond tweeted on Monday that he had cleared a small outstanding bill of €15.90, incurred when he entertained a group visiting Leinster House last Friday.