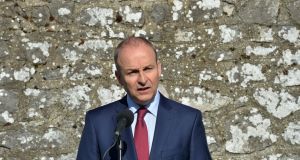 People in Northern Ireland have an “opportunity” in next week’s Westminster election to send a “clear message” that they want the North’s powersharing Assembly restored, the Fianna Fáil leader has said.

“That, I think, would tip the balance in terms of the restoration of the Assembly and the Executive.”

The Fianna Fáil leader was in Derry to support the SDLP’s general election campaign and the party leader, Colum Eastwood, who is its candidate in the Foyle constituency. The parties entered into a partnership earlier this year.

Mr Eastwood is aiming to take the seat from the outgoing MP, Sinn Féin’s Elisha McCallion, who is defending a narrow majority of 169 votes.

He told reporters he found it “inexplicable and inexcusable that the Assembly and the Executive were collapsed when they were collapsed, and that they haven’t been restored at a time when the island of Ireland is facing its greatest threat through Brexit”.

Northern Ireland has been without a power-sharing government since January 2017, when it collapsed following a row over a botched renewable heating scheme.

Mr Martin said that in his view this was a time of “great danger to Northern Ireland in terms of both the political vacuum and Brexit”.

He said he had met the North’s Secretary of State, Julian Smith, who he said “clearly is determined” to see power-sharing restored.

“We need leadership in politics in the North,” said Mr Martin. “Most people don’t understand why there isn’t an Executive and an Assembly in place. That’s why voices like Colum Eastwood’s are so important and why the SDLP in my view is the correct vehicle now to channel your anger at the inertia, at the stasis that has been the case in terms of politics here, and the lack of decision-making, the lack of leadership here in the last number of years.”

Earlier, in his speech to business leaders, he was critical of the DUP and Sinn Féin, as the North’s two largest parties, for failing to restore the Assembly, and critical of the Irish and British governments.

“The policy of the two governments to basically step back from Northern Ireland and give it less attention failed completely, as it was always going to do,” he said.

He also issued a stark warning to those present of the years of Brexit-related negotiations ahead.

“Brexit is bad for Ireland no matter what its final form is, but in the current best possible scenario, we are facing into years more of negotiations,” he said.

For this reason, Mr Martin said, this is a “critical election for the future of Northern Ireland”.