Two world views were evident in the Dáil debate on Apple

Talk may be of Apple, but political divisions have become sharper 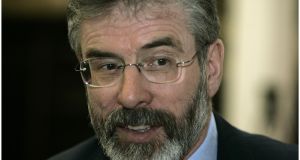 Gerry Adams: “The Fine Gael Party, in cahoots with the Fianna Fáil Party, the Labour Party and the Independent Alliance, have decided not to collect the €13 billion, plus interest, in unpaid taxes owed to the citizens of this State”

TDs returned yesterday to the Dáil from the summer recess to disagree vehemently on the State’s appeal against the European Commission’s ruling that Apple owes Ireland €13 billion plus interest in unpaid taxes.

In the end the Dáil divided along expected lines, with the Government’s motion passing comfortably.

Yet the divisions in the Dáil are deeper than just the Apple motion. What was clearly on view yesterday was the most fundamental dividing line in Irish politics.

On one side are what their opponents called “the establishment parties” – Fine Gael, Fianna Fáil, Labour and several Independents, mostly (but not all) rural and centrist.

On the other are Sinn Féin, small parties of the radical left and left-wing Independents. Gerry Adams spoke for them.

The Fianna Fáil leader Micheál Martin made the simplest case for the “establishment”.

“In this debate and over the past week we have heard parties and deputies claim that an industrial policy, which includes multinationals, has failed and is unsustainable.This model supports hundreds of thousands of jobs and pays for teachers, nurses and pensions in every part of our country. What is more, it has done so for decades.

Readers can make up their own minds about who is right. But it is clear that the divisions are becoming sharper, more ideological, more fundamental.

In an era where politics is becoming more fractured, and where coalition and perhaps minority governments are inevitable, parties that hope to govern will firstly have to build alliances with people who see politics and the world in more or less the same way. They will find them along the lines of the divide evident in the Dáil yesterday.

The historic division of Irish politics was defined by the civil war. That period is over. A new dividing line is manifesting itself, and it was clear yesterday.