TV debate: Micheál Martin does best on night of no clear losers

Inside Politics: Enda Kenny tried to remain presidential but maybe disengaged too much

Speaking during TV3’s leader debate, Micheál Martin said the Taoiseach had a "brass neck" to claim success in the area of health, claiming its policies and performance have been a disgrace. Video: TV3 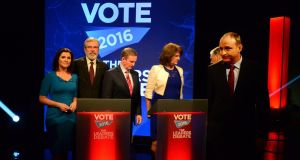 Leaders’ debates live on television are strange animals. It’s good to win, but the priority is not to lose. If you make one big gaffe, or get caught out on detail or flunk on specifics (especially on the economy), the outcome can be catastrophic.

Enda Kenny lost out in 2007 when he got flummoxed on figures.

In the second-tier debate in the same election, Gerry Adams floundered when he was pressed hard on the economy by Michael McDowell. McDowell may have bested him, but it did him no good in the subsequent election.

Nobody remembers who won the 2011 seven-way debate during the presidential election. But everyone remembers who lost big, and that was Sean Gallagher, who got into all kinds of bother over the finances of companies, and over alleged fundraising for Fianna Fáil.

So, in a strange way, winning in these debates can sometimes be as simple as surviving.

And if we used that yardstick, there were no clear losers.

Gerry Adams came under very sustained attack from his three opponents over the Special Criminal Court and struggled to defend Sinn Féin’s stance. But he was not downed by it, and he scored points on other issues.

Joan Burton was aggressive, and she had some of the better phrases of the night - “fuzzy economics” being one. But then she really made it very personal with Adams, too personally cutting at times. She also made a gaffe with a criticism of Peter McVerry.

These toe-to-toe encounters are what Micheál Martin does best, and he was probably the most consistent performer throughout and was strongest on health.

Enda Kenny was the only one not to raise his voice. He tried to remain calm and presidential but maybe disengaged too much in the middle section of the debate. There’s a thin line between staying above the fray and becoming a spectator. You have to get involved.

I thought Pat Kenny and Colette Fitzpatrick did very well, and none of their own questions were easy lobs.

The “open microphone” approach was always going to lead to interruptions, but they came hot and heavy, with some sections that descended into white noise.

Sure, that makes it messy, and there was nobody who really emerged as the clear winner, although there was a sense from some that Micheál Martin did bet by a short head. More importantly, for those with most to lose, there was no clear loser either. For some that was the most important thing. Here is my analysis.

It sounded like a bit of a joke. Not one but two Healy-Raes on the ballot paper. With an hour to go before the nomination deadline on Thursday, Danny Healy-Rae announced he would be standing in the election alongside his brother, Deputy Michael Healy-Rae.

The decision by Independent TD Tom Fleming not to contest had changed the dynamic of this constituency. Any residual doubts that Fianna Fáil would claim a seat were dispelled.

Fleming is a former member of the party. A few of the party’s more blithely optimistic people started talking about a second seat. That’s a long shot. The only question is will Norma Moriarty challenge John Brassil for the Fianna Fáil seat?

I was down in Kerry on Monday and Tuesday, and there was a sense that Brendan Griffin might be the other beneficiary because of his relative proximity.

It was only relative. Fleming is from Scartaglen near Castleisland, but Killarney was also part of his base. His departure left a geographical gap there that was not really filled by any of the live contenders.

The Healy Raes do nothing by chance. Is this just a move to consolidate Michael’s grip on the seat or is it an audacious attempt to win a second seat? There were the Kitts and the Lenihans, but they were in separate constituencies. Have siblings ever won seats in the same constituency before?