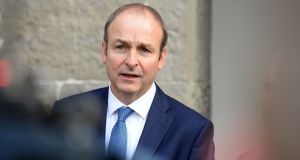 Fianna Fáil leader Micheál Martin said he was surprised by ‘the knee jerk reaction’ to the measures. Photograph: Eric Luke / The Irish Times

The travel ban introduced by US president Donald Trump on citizens of seven Muslim-majority countries is “racist in origin”, Fianna Fáil leader Micheál Martin has said.

Mr Martin said, however, that he was surprised by “the knee jerk reaction” to the measures introduced in an executive order last week, with some suggesting the State should get rid of its pre-clearance agreement with the US as a result.

US immigration officers are based at Dublin and Shannon airports, allowing passengers to avoid immigration and customs when they arrive in the US. Some 1.3 million people used the facilities last year.

The arrangement may be at risk because of the far-reaching measures adopted by the Trump administration and the Government is now due to carry out a review of the matter.

Mr Martin said he would be reluctant to see the pre-clearance arrangement go.

“I don’t think that makes sense in the Irish context, it would inconvenience hundreds of thousands of Irish people,” he told RTÉ’s Today with Seán O’Rourke.

Closing the pre-clearance centres in Dublin and Shannon was just moving the problem over to the US, he added.

“It doesn’t practically or effectively deal with the issue, what it would do is significantly disadvantage Ireland in the future.

“The way to object to this is to engage with the US administration and the US President and tell them that we do not support or agree with this. There is a growing movement within the US, in the Courts and American Civil Liberties Union and tech companies.”

Mr Martin said the travel ban was one that Fianna Fáil would strongly oppose “because it is a Muslim ban, it is racist in origin.”

Mr Trump yesterday stood behind the rushed implementation of his ban, which also applies to Syrian refugees, tweeting that he did not want to give notice to terrorists and that there were “a lot of bad ‘dudes’ out there!”

Separately, the the former chief executive of Shannon airport said it would be a risk to put the pre clearance centres there and in Dublin “on the table” as a way of voicing opposition to Mr Trump’s travel ban.

“It is of massive strategic importance for Ireland. It would be very difficult to get back,” Neil Pakey told the same programme. “It is a unique selling point for business in the region, not just for Shannon but for Dublin too.”

Both airports increased their service to the US as a result of the pre clearance centres, he said, with US carriers telling him it made a difference.

“Shannon and Dublin are the envy of airports across Europe. It does make Ireland more competitive.”

Mr Pakey added that the pre clearance agreement was legal but had been built up on goodwill and trust. At present no other airports in Europe have pre clearance facilities, he said, but 10 European airports were in negotiations about them.

“My fear is that if Ireland stops the pre clearance service then the others will step in.”