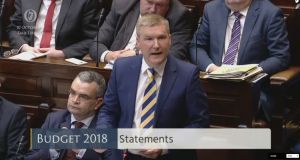 Fianna Fáil’s finance spokesperson Michael McGrath said on Tuesday gardaí should be directly involved in the investigation and should be examining the evidence.

Gardaí should now become involved in the investigation into the tracker mortgage scandal in Irish banks with criminal sanctions explored if necessary, Fianna Fáil has said.

The main Opposition party has tabled a Dáil private members motion calling for all options of sanction to be explored including penalties and even imprisonment.

Speaking ahead of a debate on the motion on Wednesday, the party’s finance spokesman Michael McGrath said he did not accept it was a coincidence and the banks all made separate mistakes.

“I believe the Garda should be directly involved in the investigation and should be examining the evidence on an ongoing basis,” he said.

He said there should be no barrier to the Garda accessing information to decide whether or not to launch a formal investigation.

Mr McGrath said all the lenders involved with tracker mortgages were “now in the dock”.

“People are ultimately held accountable. I don’t accept the argument that it is all about systems and culture.”

While welcoming the intervention by Minister for Finance Paschal Donohoe who is meeting the chief executives of the banks operating in Ireland this week to discuss the scandal, Mr McGrath said he did not get the sense people were close to getting to the truth of what happened.

As many as 30,000 homeowners have potentially been caught up in the scandal which saw banks wrongly refusing customers access to loss-making tracker mortgages in the post-crash period.

Some of those who were overcharged went on to struggle to meet their repayments and some lost their homes through repossession.

Mr McGrath was also critical of the Central Bank which he said had been behind the curve on this issue since 2010.

However, he expressed confidence in its governor Philip Lane, whom he said “means well”.

He contended the Central Bank needed more resources, pointing to the fact that it had only 26 people working on this issue compared to the 300 who were focused on this issue within Ulster Bank alone.

“What we need is for the Central Bank to get down and dirty, to get down to the nitty-gritty of examining board minutes, and management minutes,” he said.

On the question of criminal sanctions, Mr McGrath said the authorities should do whatever is necessary.

“There are already extensive powers available to the Central Bank including criminal investigation. If people are deceived of their own money that is already a criminal offence.”

Mr McGrath said it was likely the cost of the scandal could be as high as €1 billion. He said that it was necessary to ensure that all customers overcharged should have redress by Christmas.

He said one obvious power available to Minister for Finance Paschal Donohoe was intervention on remuneration packages paid to senior management, as well as voting down boards of directors where the State was a shareholder.

Mr McGrath argued Mr Donohoe should use those powers.

The motion calls on the Government to impose sanctions on banks that fail to address the issue in a timely manner.

It has proposed the introduction of legislation that will allow affected customers take class actions against the banks. as well as making senior decision-makers personally liable for decisions made under their remit.