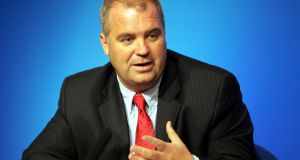 Dr Tony Holohan, chief medical officer at the Department of Health, is due to appear before the Oireachtas health committee today. Photograph: Eric Luke

The Government’s chief medical officer and other senior Department of Health officials had a deeper knowledge of the CervicalCheck policy on informing women affected by cancer test audits than previously known, newly released records show.

The documents confirm the chief medical officer Dr Tony Holohan and others were advised in October 2016 about CervicalCheck’s policy on informing women with cervical cancer that their cases had been the subject of an audit.

Clinicians were told to use their judgment as to whether the outcome of the review should be communicated to patients and asked to consider whether the release of the information would do more harm than good.

In cases where the woman had died, CervicalCheck said to “simply ensure” the result was recorded in the woman’s notes.

This policy was made known to senior officials within the department, the documents confirm. They also reveal the department was informed of the potential of legal cases, including by a woman who subsequently died.

It is the first time that the documents show discussions around open disclosure – HSE policy since 2013 – and about whether it should be followed when it came to telling affected patients about the outcome of the review into their cases.

“While CervicalCheck supports the principles of open disclosure, it is recognised that there are limitations to its universal implementation, particularly for screening services where there is an inherent recognised error rate,” a note from June 29th, 2016 said.

In draft letters prepared by CervicalCheck to the clinicians of the affected women, it was implied there was no obligation on the clinicians to disclose the information.

Labour TD Alan Kelly said the documents confirmed there was an awareness in the department about the audit and its policy on the communicating the outcome.

Mr Kelly also questioned the decision of Dr Holohan not to inform Minister for Health Simon Harris about these memos when the controversy first erupted two weeks ago.

The same point was raised by Sinn Féin TD Louise O’Reilly, who said Dr Holohan was in receipt of vital information but chose to withhold it from the Minister. Dr Holohan and the secretary general of the Department, Jim Breslin are due to appear before the Oireachtas health committee on Wednesday.

Vicky Phelan and Stephen Teap are expected before the Public Accounts Committee at 5pm. Ms Phelan won a €2.5 million settlement after she received incorrect smear test results which failed to diagnose her with cervical cancer. Mr Teap’s wife Irene was diagnosed with cancer in 2015 and died last year after two undisclosed false tests in 2010 and 2013.

It emerged last month that at least 162 women with cervical cancer had not been informed about the audit results and past false tests. Of 209 women who could have had earlier intervention in light of false tests, 18 have died.

Meanwhile, the documents also confirm CervicalCheck warned the department in March 2016 of “a risk of negative publicity and international reputation” in communicating reviews showing revised smear test results to clinicians of affected patients.

In a report shared with the department, the screening service said there was an inherent risk in having a clinical audit process as part of a national programme and this “has to be balanced by the benefit of continuous quality improvement”.

The department said it believed that affected women were going to be told about the results of the review. Neither Mr Harris nor Taoiseach Leo Varadkar were made aware of the existence of the memos, the department has said.