Toiréasa Ferris to seek Sinn Féin ticket in next election 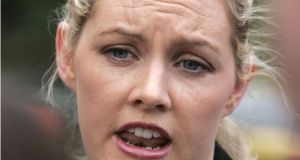 Toiréasa Ferris former mayor of Kerry is likely to be the only name on the Sinn Féin ticket at the party convention in under two weeks.

Sinn Féin councillor Toiréasa Ferris is likely to be the only name on the Sinn Féin ticket, and may well be unopposed, at the party convention in under two weeks to replace her father at the next general election.

The 37-year-old has been a councillor since 2003, when she was co-opted on to her father’s seat on Kerry County Council. She confirmed her eagerness to go forward for the seat on Monday.

The consensus in the corridors of the council in Tralee was that Ms Ferris would “walk” the next election and retain her father’s seat in the five seater that makes up the old Kerry North and Kerry South constituencies, but with a different voter.

The thinking too was that Sinn Féin would adopt a single-candidate strategy in the general election. At convention, it would be a brave person who would go up against Ms Ferris, it was felt. The consensus from Fine Gael and Fianna Fáil was that her appeal would be broader than her father’s and would draw the younger voter, as well as women voters.

However, Ms Ferris is unlikely to be the only female candidate. There may be three women in the race for a Dáil seat in Kerry next time, including her fellow councillors, Fine Gael solicitor Aoife Thornton, and Fianna Fáil teacher Norma Moriarty from South Kerry, who has taken a year out to concentrate on politics full-time. Fianna Fáil mayor of Tralee Norma Foley cannot be ruled out either.

Ms Ferris, a part-time lecturer in law at the Kerry College of Further Education in Tralee, is a graduate of the University of Limerick in law and European studies. She holds a masters from Queens in Belfast in human rights and criminal justice. A mother of two children, she has deferred a Phd she is working on at UL.