Fine Gael no longer holds a seat in constituency, having previously had two 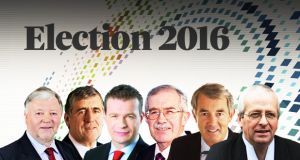 Fine Gael’s Tom Hayes has been eliminated and the party no longer holds a seat in the constituency, having previously had two.

Both Mr Coonan and Mr Kelly are from the former north Tipperary constituency.

Mr Hayes said he believed the amalgamation of the county’s constituencies was part of the reason he failed to win a seat.

Fianna Fáil’s Jackie Cahill won a seat after the sixth count. He was the third candidate to be elected into the five seat constituency.

Earlier, Mr Kelly said he hoped he would win his seat in Tipperary but it was a “bitter sweet” occasion.

“It’s a very emotional day to see so many friends and colleagues who have lost their seats,” he said. “I want to thank the people of Tipperary for supporting me and how they’ve backed me.”

He said rebuilding the Labour party was going to be a huge project and he was ready to “step up to the plate”.

“I guarantee you the Labour party will be coming back as a force in this country,” he said.

Mr Hayes said he was very disappointed he did not win a seat. “We had the quota of votes, we should have got a seat,” he said.

He said it was the first time in the history of the State the county did not have a Fine Gael TD.

“It’s a pity west Tipperary, from Cashel to Tipperary, now has no TD,” he said.