The tiptoe back to Fianna Fáil that became a stampede 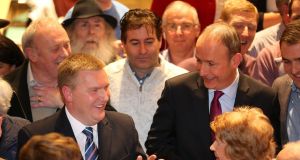 A tiptoeing back to Fianna Fail by older, rural voters with the party ingrained in their DNA had been widely anticipated in this general election.

But no-one was predicting a nationwide stampede.

Back in 2004, then Ombudsman Emily O’Reilly famously urged people to “tiptoe back to the churches”.

She later clarified she had actually been promoting a return to spirituality.

In 2016, many voters have clearly been infused with a spirit of Christian forgiveness as far as Fianna Fail is concerned.

The white hot anger directed against the party in 2011 appears to have evaporated and those ‘gene pool’ voters who abandoned the Soldiers of Destiny five years ago have returned to their spiritual home in numbers.

In the aftermath of the economic crash, former Fine Gael director of elections Phil Hogan memorably appealed to “decent” Fianna Fáil voters to lend his party their votes ahead of the 2011 general election.

It is now clear the loan was only a temporary one.

The unpopular Coalition partners having taken a drubbing, with Labour in particular expected to suffer significant seat losses.

Thoughts have inevitably turned towards a grand coalition of the former Civil War enemies, Fine Gael and Fianna Fail.

From early on Saturday, senior Fianna Fail figures were already using carefully chosen code words such as “onus” and “responsibility” in their media appearances.

By the afternoon, some Fine Gael and Fianna Fáil sources were privately conceding to reporters that a coalition between the two parties was the likely outcome of the general election.

But would the two parties’ grassroots revolt at the prospect?

Some analysts suggest moving towards a grand coalition would be political suicide for both parties, and almost certainly cause splits in the ranks.

Many have noted it would give Sinn Féin, another party which has enjoyed a good election, an advantage as the leading voice of Opposition in the next Dáil.

It could leave the way clear for a left-wing government the next time the country goes to the polls.

A more palatable option could be for Fianna Fail to support a bruised Fine Gael minority Government from the Opposition benches in the national interest.

This would be tricky territory for an emboldened Fianna Fail.

Party strategists always said privately that the rebuilding and renewing programme Fianna Fail had embarked on after the 2011 general election would be a two-term process.

That said, the country needs a government.

Soul-searching will surely be the order of the day.