The Tánaiste wants to hear your ideas before the election

Tánaiste Joan Burton launched #TalkToJoan in Dublin, an online forum encouraging members of the public to engage with policies. The Tánaiste also talked about her hope for a continued Siteserv investigations. 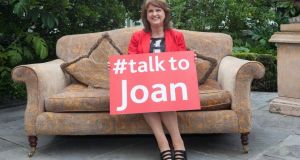 The Labour Party has launched a campaign called #TalkToJoan, an online initiative it says is aimed at engaging with party members and the general public ahead of the next general election.

The initiative is part of a new series of consultations the party is calling Opportunity 2016. It includes a series of regional forums for Labour members during June and July that will discuss key issues the party wishes to focus on ahead of the election, expected early next year.

Members of the public are being invited to submit their own policy proposals to the Labour Party via Twitter @labour, and facebook.com/thelabourparty.

“After consulting with our party members and special guests, we will be asking the general public about their own policy proposals which will then form the basis for a live #TalkToJoan Twitter chat with the Tánaiste”, the party said. People will be invited to submit their ideas online and via Twitter/Facebook. More details here: http://labour.ie/talktojoan.