The shape of the 33rd Dáil - gender and age

Less than a quarter of TDs in the 33rd Dail are women and the average age is 48.5

27-year-old Roscommon-Galway TD Claire Kerrane says the idea of a united Ireland and Sinn Féin's positions on social justice issues were incentives for her to sign up to the party in her late teens. 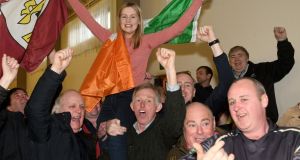 Claire Kerrane, Sinn Féin’s newly elected TD for Roscommon-Galway, after she was elected: The political adviser-turned-elected deputy is the youngest woman in the new Dáil.

“It’s official – there is no turning back now,” said Claire Kerrane, Sinn Féin’s newly elected TD for Roscommon-Galway, after she signed the roll book for the 33rd Dáil Éireann on Thursday.

The Sinn Féin political adviser-turned-elected deputy is the youngest woman in the new Dáil.

Kerrane is in two minorities in the new parliament: she is among just 22.5 per cent of women elected to the Dáil (36 of the 160 deputies) and among just 2 per cent of TDs in their 20s.

She is one of only three twentysomething TDs; the other two are in Fianna Fáil – Dublin West’s Jack Chambers, who is 29, and Cork East’s James O’Connor, who, at 22, is the baby of the Dáil.

“There is no upstairs, downstairs in the party. Everyone is listened to. We are all a team,” said Kerrane on the challenge of being a young TD in a Dáil where the average age is 48½.

Some 38 per cent of the Dáil’s new deputies – 61 in total – are in the 40s, the age decade with the largest representation in the Dáil. Fifty-something deputies are second with 29 per cent, or 47 TDs, followed by the 25 thirty-somethings who make up 16 per cent of the new parliament.

The average ages across almost all of the parties are in their 40s – Fianna Fáil (48), Sinn Féin (47), Fine Gael (48), Green Party (45), Labour (46) and the Social Democrats (46.5) Only Solidarity-People Before Profit and the Independents have average ages for their TDs in their 50s.

The oldest TDs are both Fine Gael deputies: Kildare North’s Bernard Durkan (74) and Louth’s Fergus O’Dowd (71), the only septuagenarians in the 33rd Dáil.

The Dáil’s gender balance is still well below an even split. Little has changed in gender representation since the 2016 election after which 35 or 22.3 per cent of TDs were women. There had been a 40 per cent increase in women being elected between the 2011 and 2016 elections.

While every constituency nominated a female candidate – a first in Irish electoral history – 10 of the 39 constituencies sent only men to the Dáil.

The Social Democrats have the most women as a share of their TDs. Four of the party’s six TDs – or 66.6 per cent – are women including co-leaders Catherine Murphy and Róisín Shortall.

Labour have the worst representation in terms of gender balance: all six of the party’s TDs are men. The party lost high-profile female politicians Joan Burton and Jan O’Sullivan in the election.

After the Social Democrats, Sinn Féin are second best in terms of gender balance. Some 35 per cent, or 13, of the party’s new deputies are women out of its 37-strong TD count.

“We are far away from the 50:50 mark but for a party at 35 per cent that is really good and it is solid and it is needed. We need more of that,” said Kerrane. “We can build on from where we are at now and there are a lot more women going in and that is positive but we need to see that replicated across all parties more and more.”

The qualified secondary school teacher is only the second female deputy to represent Roscommon in the Dáil and the first since 1981.

The oldest member of the Dáil, Bernard Durkan, said that old age should not be a restriction “for any job” not least that of a TD. “If the person is able to do and have the determination to do it, they should be considered,” he said.

Durkan said he hoped that the new, younger members of the Dáil and “the more senior people who are already there will reflect the best of Irish society.”