The new Green councillors you have never heard of before

As a Green wave sweeps the local elections, here is our guide to the names you need to know 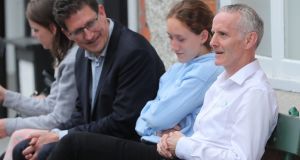 Green Party leader Eamon Ryan and European candidate Ciarán Cuffe during counting in the local and European elections and divorce referendum at the RDS in Dublin. Photograph: Niall Carson/PA Wire

Back in 1991, the Greens had an unexpected election in Dublin, winning seats they had never thought possible. Sadhbh O’Neill, then a 21-year-old student, had not even campaigned and was in the middle of a J-1 working holiday visa in the US when the results came through that she had been elected as a councillor.

Similarly, many of the new batch of Green councillors due to be elected this weekend will be unknown to the wider public. Here are some of those who have made the breakthrough.

Set to top the poll in Rathfarnham-Templeogue, William Priestley runs a trading company but has a lot of experience in education and social policy, as well as a trade union background.

Originally from Dublin, he worked for more than a decade with at-risk young people in America and in Limerick before returning to Dublin.

He has also delivered a vision of empowerment from the TED stage.

A bit of a renaissance politician, one of his most fascinating projects is a multimedia work of fiction called Inferno, Kid, based on a young man, Dylan, living on the margins of society in Limerick.

Hazel Chu has been a prominent member of the Green Party in recent years. The daughter of Chinese immigrants, she is formerly head of communications with Diageo. Her husband Patrick Costello is already a Dublin city councillor for the Greens (and will be easily re-elected). She has won a staggering one-third of first preferences in the Pembroke ward.

Una Power, who stood in Killiney-Shankill, is still in her 20s but has been involved with the Green Party since her teens, in the youth wing, and more recently as women’s officer. She is a communications adviser to Catherine Martin and, like her party colleagues, focused almost exclusively on local issues such as transport, waste, natural amenities, and local planning.

Another candidate in her 20s, Lorna Bogue is a masters student in economic analysis, having done a BA in Irish music and dance. Poised to be elected in Cork South-Central, she was a prominent member of the Cork Together For Yes campaign last year. She also objected to the incinerator in Ringaskiddy in 2016 and helped draft the party’s legislation banning microbeads.

At 22, the Green Party candidate for Blackrock will be one of the youngest councillors in the State. Representing Blackrock, Booterstown, Seapoint, and Deansgrange, he grew up in the area and is a former Blackrock College student. He holds a BA in Economics from Trinity College Dublin, where he was heavily involved in climate activism. His profile says he “currently works in public relations, and enjoys swimming in Dublin Bay”.

Set to be a new councillor in Dublin Central, Hourigan is an architect and has consulted on sustainability. She is now the full-time carer of her child, who has a disability. A resident of Cabra, her party biography sets out why she joined the party: “I joined the Green Party in 2011 with a clear conviction that Ireland needs a voice at national level on sustainable and ethical living, climate change and alternatives to the current government strategy which places the health of our economy above the health and wellbeing of people and their families.”

Pauline O’Reilly may win a seat for the party in Galway city, where she is also the general election candidate. A solicitor by training, she is currently a stay-at-home parent for her two children, She is the Green Party spokesperson for children and youth affairs.

Another breakthrough for the party in Dublin, this time in the south inner city. Michael Pidgeon has had a varied career, being involved with trade unions, environmental campaigns, and cycling campaigns. He previously worked in communications for mayor of London Sadiq Khan and is currently head of communications for the Irish Nurses and Midwives’ Organisation. A political anorak, he maintains an online archive of Irish election manifestos, which he presumably put to good use in this campaign.