The McCabe affair and the Tánaiste: How did we reach this point?

Timeline: Story of Garda whistleblower led from complaint made in early 2006 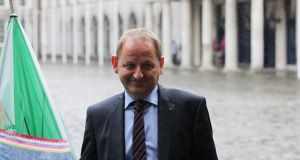 Saga involving Garda whistleblower Sgt Maurice McCabe had its beginnings over a decade ago. An end is not yet in sight. File photograph: Stephen Collins/Collins 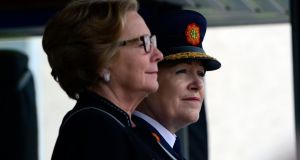 The saga involving Garda whistleblower Sgt Maurice McCabe had its beginnings over a decade ago.

Two garda commissioners, two minister for justice and two secretaries general of the Department of Justice have since departed from office, having been swept up in the contoversy and related Garda matters.

Here are the key events of the McCabe affair, the end of which is not yet in sight:

January 2006: Maurice McCabe makes a complaint about two Garda colleagues who arrived at the scene of a suicide from a pub where they had been drinking. One of them is subsequently disciplined.

December 2006: A daughter of the disciplined garda, Ms D, makes a complaint of child sexual abuse against McCabe. The allegation dates from 1998, and it was claimed he touched her inappropriately when playing hide-and-seek. The DPP concludes there are no grounds for prosecution, stating there is no evidence the incident ever happened and, even if it did, it could not have been characterised as anything more than horseplay.

2008: McCabe raises concerns about penalty points being quashed by senior gardaí for reasons of nepotism or favouritism. At this stage, McCabe was stationed in Mullingar but had spent most of his career in the Cavan-Monaghan division, where he himself was brought up.

McCabe’s concerns are not acted upon. He continues his research into the abuse of penalty points, discovering a large number of quashed points in his trawls through the Garda’s Pulse system. Eventually, his superiors restricted his access to Pulse.

2008-2010: McCabe builds up a dossier of 42 cases of alleged malpractice, harassment and corruption in Bailieborough, Co Cavan. There is an internal investigation, headed by senior gardaí, but McCabe believes it has not taken his most serious allegations seriously.

January 2012: McCabe makes further complaints to the Garda’s then confidential recipient Oliver Connolly, whose job it was to hear complaints and pass them on for investigation. By this time, McCabe and another Cavan garda, John Wilson, have amassed a large file on penalty points.

May 2013: Assistant commissioner John O’Mahoney concludes an internal inquiry into the cancelling of penalty points. It concludes that some actions might have breached Garda rules but finds no evidence of criminality.

October 2013: Comptroller and auditor general Séamus McCarthy publishes his own report on penalty points. At this time, there are sharp Dáil exchanges between then justice minister Alan Shatter and opposition TDs, Mick Wallace and Clare Daly, over McCabe.

February 2014: McCabe hands the dossier to Fianna Fáil leader Micheál Martin, who hands it to then taoiseach Enda Kenny.

March 2014: Callinan resigns as Garda commissioner. Senior counsel Sean Guerin begins a review of the dossier to determine whether it warrants further action.

May 2014: Guerin issues his report, which criticises Shatter and the Garda, claiming they did not fulfil their obligations to properly investigate matters. Shatter resigns that day but later he successfully overturns Guerin’s findings against him after challenging them in the courts.

July 2014: New minister for justice Frances Fitzgerald orders an “independent review mechanism” for all the cases raised by whistleblowers. Six barristers in total are involved in the exercise.

July 2014: Department of Justice secretary general Brian Purcell steps down in the wake of the Guerin report and amid criticism of the department’s handling information on another policing controversy, in this case the Garda’s system of recording calls.

February 2015: With political pressure over the McCabe dossier not abating, the government announces the establishment of a commission of inquiry, chaired by Judge Kevin O’Higgins. He is asked to investigate claims of inaction, corruption and malpractice in the Cavan-Monaghan Division.

May 2015: The legal team for the Garda commissioner discloses an assertive strategy that will question McCabe’s integrity. When asked by Judge O’Higgins whether was he attacking McCabe’s “motivation and attacking his character”, the counsel replies “right the way through”.

At the early stage of the commission, the legal team for the Garda was putting forward the argument that McCabe may have been motivated by a personal grudge.

The strategy is disclosed in an email sent in May 2015 to Fitzgerald. It refers to McCabe’s concern about a “serious criminal” case”, presumably the discredited sexual allegation, and says the Garda legal team was raising this as a matter “potentially relevant to motivation”.

Though unclear, the email probably refers to McCabe’s official complaint about the way in which that allegation was investigated.

Late 2015: McCabe becomes aware of a “cut and paste” error by a counsellor which resulted in false and egregious allegations of sexual abuse against him circulating for almost two years in Tusla, the Garda Síochána and the HSE.

May 2016: The O’Higgins Commission reports. While not upholding the allegations of corruption, it does uphold allegations of inaction and malpractice by gardaí in serious cases.

The chair, Judge O’Higgins, finds Shatter handled complaints made by Sgt McCabe in a professional and appropriate manner. The chairman also praises McCabe.

Transcripts from the hearing disclosing the strategy adopted by the Garda’s legal team come into the public domain.

October 2016: The Government asks another retired judge, Iarfhlaith O’Neill, to look at four cases of protected disclosures, including those of Supt David Taylor, who alleges there was a smear campaign conducted against McCabe.

January 2017: On receipt of the O’Neill report, the Government establishes a commission of investigation into those allegations. it is chaired by Peter Charleton.

February 2017: As details are made public of the extraordinary false allegations made against McCabe, both the HSE and Tusla apologise. The commission of investigation is upgraded to a tribunal of inquiry.

Summer 2017: The commission hears evidence from witnesses about a series of mistakes, omissions and incompetence that allowed the false claims to be so widely circulated, and the long delay in their withdrawal. The tribunal investigates whether there was a campaign involved to discredit McCabe.

November 2017: Labour TD Alan Kelly submits a series of questions asking whether the Department of Justice was aware of the aggressive strategy pursued by the Garda’s legal team at the O’Higgins commission. The initial response from Taoiseach Leo Varadkar was that Fitzgerald only became aware in 2016. But the emergence of the email from May 2015 shows she had been made aware of the strategy earlier.

Week starting November 20th: The Tánaiste insists she did not recall the email or the contents, saying she was reminded of its existence by the Department on November 16th. She also points out the email advised her she had no function in regard to the Garda’s legal strategy at the commission.

The Opposition claim in the Dáil that the email is evidence of a conspiracy by the Minister and the Garda to discredit McCabe.

Thursday: Sinn Féin tables a motion of no confidence in Fitzgerald. The Fine Gael parliamentary party passes a motion on Thursday night unanimously supporting the Minister.

Friday: Fianna Fáil tables a vote of no confidence in Fitzgerald. With no compromise in sight, a general election seems inevitable.

Weekend: A flurry of meetings between Fianna Fáil leader Micheál Martin and Taoiseach Leo Varadkar follows amid efforts to find a way out of the political crisis.

Monday night: Three new emails from 2015 emerge from the Department of Justice showing Fitzgerald was advised of the legal strategy being used by the former Garda commissioner Nóirín O’Sullivan against Sgt McCabe long before 2016.

Senior Fine Gael figures describe the discovery as a gamechanger and speak privately about the need for Fitzgerald to resign.

However, on Twitter, the Tánaiste says: “As Justice Minister I could not interfere with the O’Higgjns Commission. This is confirmed twice in today’s docs & has been confirmed by the AG. The Tribunal will objectively judge the appropriateness of my conduct. I look forward to giving my evidence to the Tribunal early in January.”

The statement fuels speculation she will not resign and a general election will take place before Christmas. That view is reinforced when Minister for Foreign Affairs Simon Coveney goes on RTÉ’s Clare Byrne Live to defend her position.

Tuesday: Ahead of the planned motion by Fianna Fáil at 8pm, a Cabinet meeting is held on Tuesday morning and Frances Fitzgerald offers her resignation to the Taoiseach.

She insists she will be “vindicated” by the Disclosures Tribunal which will examine the issue in January.